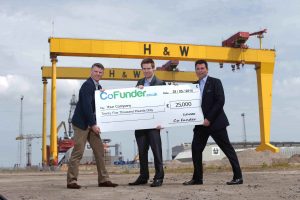 THE Northern Ireland economy received a welcome boost today with the launch of an innovative new Belfast-based company which, through the exciting concept of ‘crowdfunding’, aims to help businesses grow, create jobs and stimulate economic growth.

With many businesses in Northern Ireland finding it difficult to secure much needed finance from the banking sector to invest and grow, CoFunder (NI) Ltd provides an online platform for firms to raise the money they need from a large pool of ‘funders’ on the open market.

And with interest rates currently offering savers very little return on their hard earned cash, CoFunder will also provide a viable alternative for individuals or companies wanting a better return on their investment. Indeed, funders wanting to invest their money in local business via CoFunder can set their own interest rates to beat inflation and ensure that the their return is significantly better than anything currently on offer from the banks, building societies or other financial institutions.

CoFunder is Northern Ireland’s first dedicated crowdfunding platform and the first company of its kind in Ireland to receive approval from its financial regulator, having been given the seal of approval from the Financial Conduct Authority less than one month after the FCA published its rules and regulations for crowdfunding.

The CoFunder model operates using an online platform that enables established small businesses to raise funds (from £5,000 to £100,000) through small contributions from a large number of ‘funders’ in the form of individuals or companies who can each invest anything from as little as £100 to a maximum of £2,500 in a single venture.

All loan applications are carefully analysed and vetted by CoFunder’s experienced financial experts before appearing online. Potential funders are then invited to make a loan offer outlining the interest rate they would like in return, which they are able to change if a bidding scenario develops as a result of a high level of interest from funders in a particular project.

Last year, the British Government committed £100M to the growing crowdfunding industry which is set to create a ‘new generation of funding’ in Northern Ireland according to CoFunder Chief Operating Officer Aidan Doherty.

“With the finance required by small businesses to invest and grow their business proving hard to come by from the banking sector, crowdfunding has been steadily growing outside of Northern Ireland in recent years and this growth is expected to continue,” said Mr Doherty.

“CoFunder (NI) Ltd aims to create a new generation of funding in Northern Ireland by enabling creditworthy businesses with funding requirements to connect directly to lenders with available capital, thus removing the reliance upon the restrictive lending practices and high costs associated with bank funding. All on a completely transparent, flexible, fair and open platform.

“In addition, funders can obtain interest rates which are better than the minimal rates currently offered by banks and institutions, and through CoFunder’s system can choose their own desired return on investment based on their interpretation of risk,” he added.

The team behind CoFunder is already very experienced in the emergent crowdfunding market, having launched SeedUps, the equity crowdfunding platform for start-up technology companies which has already registered more than 3,000 companies across Ireland, UK, USA and Canada.

An increase in demand from companies that didn’t meet the SeedUps criteria led to the development of CoFunder, as Aidan Doherty explained.

“We have learned much about the lack of business funding in the two years since we launched SeedUps,” he said. “With over 3,000 tech start-ups registered on the platform in Ireland, the UK, Canada and the USA we continually turn away good local businesses, simply because they do not meet with the SeedUps criteria of being less than two years old (to qualify as a start-up), or they are not in the technology sector.

“To address this issue, and acknowledging the continued restrictive lending policies of banks, we developed CoFunder which is aimed at quality, growth based companies who are already established and looking to expand and create jobs but who lack the necessary working capital to do so,” he continued.

“The direct relationship this creates between borrowers and lenders serves to improve Corporate Governance and responsibility. We believe that if borrowers know they are responsible to real people rather than faceless institutions, they are less likely to default. And lenders will have a true sense of ownership, and will act to benefit their investment by using and promoting the businesses they invest in. CoFunder’s advanced social networking tools will serve to promote these relationships,” concluded Mr Doherty.

According to the UK Crowd Funding Association, of which CoFunder is a member, the world’s first online crowdfunded project was believed to involve British rock band Marillion which in 1997 asked fans to help pay for their US tour in advance.

Now crowdfunding is a multi-million pound industry that on a global scale is currently estimated to be doubling every two months with a recent report suggesting that a new project is created somewhere in the world every three minutes.

In a recent interview with The Telegraph newspaper, Richard Branson reportedly said that crowdfunding had shifted the balance of power away from banks and private equity houses and that he would have used crowdfunding to raise finance for Virgin had it existed at the time.