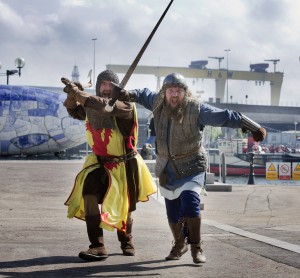 They were in the city to ‘encourage’ NI visitors to do battle at Bannockburn Live, a large-scale re-enactment of the legendary clash taking place on Saturday 28th, Sunday 29th and Monday 30th June 2014 in Scotland.

Northern Ireland fans including Arlo Kilpatrick, aged 10, are being invited to step back in time to June 1314 and soak up the atmosphere, sights and sounds of medieval life and experience.

The event is the largest of its nature in Scotland. It captures every essence of Scottish culture and has something to delight the whole family whether you are a foodie, music fan or history lover. It is home not only to the ‘Encampment’ but to a ‘Music Arena’, where the stage will come alive with over 300 performers including Julie Fowlis, Dougie McLean, Karine Polwart and Rachel Sermanni. There is also a ‘Storyville’ tent where Scotland’s culture and history will be told by a range of artists, from writers to stand-up comedians and renowned singer songwriters, and a ‘Land of Food and Drink’ tent for foodies.

A ‘Clan and Family Village’ will see a gathering of 40 clans who have travelled from across the globe, making it the perfect place for Ulster Scots and local ancestry enthusiasts to find out if they were related to anyone that fought at the battle.


One Response to SCOTTISH WARRIORS TAKE ‘CHARGE’ IN BELFAST