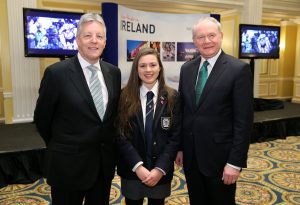 The First Minister and the deputy First Minister took the opportunity to reflect on the immense success that Northern Ireland enjoyed in 2013 and looked forward to building on that legacy.

The First Minister Peter Robinson said: “We acknowledge the ongoing support of the US administration and its role in the political and economic development of Northern Ireland.

“The Executive has made growing our economy its number one priority and attracting Foreign Direct Investment is vital if we are to rebalance and rebuild our economy. The United States is our number one source of foreign direct investment with over 165 US owned businesses in Northern Ireland employing over 18,000 employees.

“Major global companies such as the CME Group, Citigroup, HBO and Universal have chosen to invest in Northern Ireland and more importantly, continue to re-invest. We will continue to actively promote Northern Ireland as a tempting business proposition and we will do all that we can to support existing and potential business to grow their operations here.”

The deputy First Minister Martin McGuinness said: “The US and Ireland have a long lasting mutually beneficial relationship which we greatly appreciate. The traditional St. Patrick’s Day celebrations provide an opportunity to thank the US administration for their continued support.

“In 2013 our international reputation experienced unprecedented growth and we took our place on the world stage for all the right reasons. The G8 Summit in June saw the world’s leaders come to our shores and the legacy of Derry City of Culture 2013 will live on for a very long time. 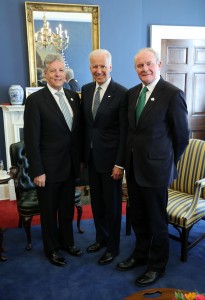 “In 2014 we are aiming even higher and In May, we will host the Giro d’Italia, one of the world’s largest annual sporting events. Over 140,000 visitors will come here for the Grand Partenza and the race which will be viewed in over 165 countries around the world.

“The Executive will continue in 2014 to work hard to raise our profile as a top and a culturally rich tourism destination.”