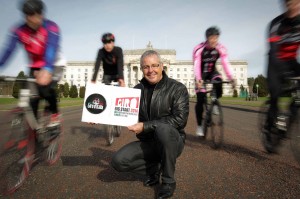 THE Northern Ireland Tourist Board has launched a new campaign to encourage people across the province to ‘Be Part of the Start’ of the Giro d’Italia race in three month’s time.

And the tourist board wants people to join in with the festivities that will be taking place around the country.

The Grande Partenza or ‘Big Start’ of the race will see around 200 of the world’s best cyclists from over 30 countries converge in Northern Ireland for the biggest sporting event of 2014.

Irish cycling legend Stephen Roche, a former winner of both the Giro d’Italia and the Tour de France, flew into Belfast to launch the NITB campaign which is expecting to attract around 140,000 overnight visitors, including 42,000 from out of state.

In addition, a massive audience of an estimated 800 million is expected to tune in from across the globe to watch the cyclists compete along Northern Ireland’s spectacular Giro routes on TV.

NITB Destination Marketing and PR Manager Ruth Burns has urged people to ‘Be Part of the Start’ and stressed that the Giro d’Italia will be an event for everyone, and not just cycling enthusiasts.

“Obviously, the fact that Northern Ireland is hosting an event as prestigious as the Giro d’Italia is a dream come true for the legions of cycling fans throughout Northern Ireland and the Republic, but the excitement will not only be for the cycling community,” said Ruth.

“In addition to the feast of cycling, there will be a fantastic array of family-friendly events and festivals in Belfast and Armagh in the run up to and during Giro with lots of music, food and live entertainment for visitors to look forward to.

“As Northern Ireland embraces the pink of the leader’s jersey, this will be a hugely colourful and not-to-be-missed experience which is why we’ve launched our ‘Be Part of the Start’ campaign to urge everyone in Northern Ireland and the Republic of Ireland to come along and join in the festivities in May,” she added.

The public will catch their first glimpse of the world’s best cyclists at the Giro d’Italia Team Presentation in Belfast on Thursday May 8 with the competitive action getting under way on Friday May 9 with the Team Time Trial from Titanic Belfast to Stormont and finishing at Belfast City Hall.

Saturday (May 10) will see the competitors travel up to the North Antrim Coast and race along the Causeway Coastal Route back to Belfast before concluding on the Sunday (May 11) with a road stage from Armagh to Dublin.

“We are not only welcoming hundreds of cyclists but also their families and friends, technical teams and sponsors who have come to support them.

“They will enjoy our warm hospitality, taste our local produce, see our sights and meet our people creating positive memories they will talk about when they get back to their own countries,” said Ruth Burns.

“We know from past experience that the people of Northern Ireland really get behind the big events that come here and when you think that tens of thousands more will be joining them from the Republic of Ireland and other countries, we are on course for one of the most exciting and memorable starts to the race ever staged.

“When Northern Ireland hosted the Irish Open at Royal Portrush in 2012, we did it in record-breaking fashion as it became the first European Tour event ever to completely sell out.

“I firmly believe that the Grande Partenza will give us another opportunity to demonstrate Northern Ireland’s ability to host massive global events and show just what makes us so special by showcasing our distinctive sense of humour, our unforgettable scenery and unique visitor attractions,” concluded Ruth.

Speaking at the campaign launch, cycling legend Stephen Roche, one of only two cyclists to win the triple crown of victories in the Tour de France and the Giro d’Italia stage races, plus the World Road Race Championship, said: “To host an event of this scale is a real coup for Northern Ireland and the Republic. Northern Ireland is a very beautiful part of the world which will make for a very scenic and of course challenging race which I’m sure that all the cyclists will enjoy.

“This really is a once-in-a-lifetime opportunity for people in Northern Ireland to witness an event like this at such close quarters and with all the festivities being organised to mark the occasion, I would certainly echo the words of the Northern Ireland Tourist Board and urge people to ‘Be Part of the Start’ in May,” he added.

The benefits of hosting an event like this in Northern Ireland are huge.

An estimated 140,000 overnight visitors, as well as countless more spectators on each day, will bring a considerable boost to both the Northern Ireland and Republic of Ireland economy with Northern Ireland set to be the prime benefactor due to the fact that most of the racing will take place here.

On top of this, the event is expected to generate around £10million worth of international media coverage which will really showcase Northern Ireland as a top quality destination and host for world class events.

The Grande Partenza event in Denmark in 2012 attracted 500,000 spectators and gained massive international media coverage when it was broadcast in 165 countries with a global audience of 775 million people.