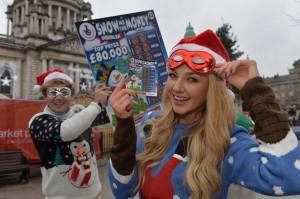 And they handed out ‘Secret Santa’ packs to lucky commuters and shoppers, hoping to inspire people who want to give something a little extra special this Christmas.

The squad donned their best Christmas jumpers and took to the streets after a National Lottery Scratchcards survey revealed that a massive 83 per cent of people now take part in Secret Santa activity with their work colleagues each December.

However, although 37 per cent say that taking part makes them feel ‘Christmassy’, one in every five people say they never know what to buy.

And it isn’t just restricted to the workplace with 16 per cent involved in Secret Santa with friends and almost one in ten adopting this fun method to buy presents for close relatives.

Even pets are starting to get in on the act, with one per cent of people admitting they include their pooch or feline friends in the festive fun and making sure they also have a gift to open for the special day.

Each Secret Santa pack handed out today contained a seasonal National Lottery Scratchcard, plus a Christmas card and pen so that the adult recipient could personalise the gift as part of their Secret Santa, which may lead to an exciting and fun windfall this festive season.

“Christmas is supposed to be fun, but finding an excitingly different gift every year is always tricky so any inspiration is a bonus!” said a National Lottery Scratchcards spokesperson.

“More of us admit to adopting the Secret Santa approach to present buying and setting a top budget to spend on each other. In fact, our survey revealed that more than half (52%) of Secret Santa participants set a price limit of £5 on their gift, with almost a third (32%) increasing that to £10 per present.

“A National Lottery Scratchcard is a great and exciting alternative for that surprise present – and who knows what it might lead to!”

One man who would certainly appreciate a National Lottery Scratchcard this Christmas is Mark O’Donoghue from Enniskillen, a keen fisherman who was definitely in the right plaice at the right time when he reeled in a cool £100k from a £2 Scatchcard earlier this year.

Festive forgetfulness shouldn’t be an excuse for anyone still toying with the idea of gifting bubble bath or socks as a budget-friendly solution.

Whether through a Secret Santa gift, popping one as an extra something in the Christmas card or placing one on the side plate to scratch before tucking into the turkey dinner, the festive range cost from only £1 to £5 each and could really give someone a Christmas to remember.