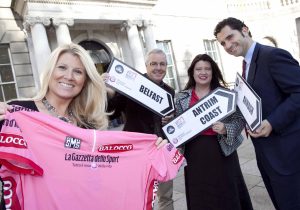 NORTHERN Ireland is gearing up for the biggest sporting event of 2014 with the Northern Ireland Tourist Board (NITB) expecting in excess of 140,000 overnight visitors for the start of next year’s Giro d’Italia cycle race.

The world’s second-biggest cycling race is expected to generate millions of pounds towards both the Northern Ireland and Republic of Ireland economy with Northern Ireland set to be the prime benefactor due to the fact that most of the racing will take place here.

The Giro d’Italia will see more than 200 of the world’s best cyclists from over 30 countries arriving in Northern Ireland for what’s known as the Grande Partenza (Big Start) in Belfast on Friday May 9.

Saturday (May 10) will see the Giro travel up to the North Antrim Coast and race along the Causeway Coastal Route back to Belfast before concluding on the Sunday (May 11) with a road stage from Armagh to Dublin on Sunday May 11.

NITB’s Director of Marketing Naomi Waite is urging Northern Ireland cycling fans to join in the celebrations to launch the start of the race.

“As the Giro d’Italia is one of the world’s biggest sporting spectacles, there is enormous prestige for Northern Ireland in being selected as the start venue for this event, once again highlighting our growing reputation as a world class destination,” said Naomi.

“Cycling has never enjoyed such popularity across the world as it does now and we would urge fans across Northern Ireland to join us in Belfast for the launch and be part of the celebrations that will be taking place around the city.

“The team presentation will take place in Belfast on Thursday May 8 with the Team Time Trial on the Friday, followed by a day of road racing on Saturday which will see cyclists race up to the North Antrim Coast and along the Causeway Coastal Route back to Belfast. So there is plenty of cycling to enjoy for fans who want to make a weekend of it,” she added.

“In addition to the feast of cycling, there will be a fantastic array of events and festivals in Belfast and Armagh in the run up to and during Giro with music, food and live entertainment for visitors to look forward to.

“The benefits of an event like this for Northern Ireland are huge. We’re expecting more than 140,000 overnight visitors for the event, as well as countless more spectators on each day, which will generate millions for the local economy.

“Over the last number of years, Northern Ireland has continued to go from strength to strength hosting a number of major of world class events and we are very excited to keep this momentum going in 2014 with the Giro d’Italia” concluded Naomi.

Giovanni Nipoti, Sport Manager, RCS Sport added: “We are delighted that the Big Start of the Giro d’Italia 2014 is in Northern Ireland, a place known around the world for its rich sporting heritage. I am confident the cyclists will enjoy the route which I believe they will find very challenging. Northern Ireland is a beautiful part of the world and will make for a very scenic race.”

Next year’s event will feel like home from home for Italian visitors to Northern Ireland. 2012 saw a strong return to growth from the Italian market with 27,000 visitors coming from Italy to Northern I


One Response to NORTHERN IRELAND GEARING UP FOR WHEELY BIG EVENT