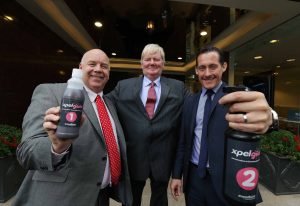 Pictured at the global launch of the product xpelgum today at the Merchant Hotel, Belfast, is (from left) Ian Murphy, Director of Growth and Scaling, Invest NI, Chairman/Technical Director of Expelliere International John McCandless and xpelgum Sales Director Chris Lomas.

IT is a problem which blights every pavement in every town and city all over the world – discarded chewing gum.

But not for much longer.

For Northern Ireland company Expelliere International today launched a unique and highly innovative solution to the perennial problem which has scarred pavements and public spaces for decades.

xpelgum is an ionic-based solution which when applied breaks down the chemical structure of chewing gum to remove its stickiness and allow for the safe removal of the discarded piece of gum.

The technology was first developed at Queen’s University Belfast six years ago and since then over £2m has been invested by the local business consortium to take the ground-breaking technology to the point where it can now be launched to a global chewing gum clean-up market estimated to be in the region of $50bn.

At present there are a number of partial solutions to the problem in the market which involve high pressure water jets or steam which can cause damage to the surface below the gum and are thus limited in their use.

xpelgum is an environmentally safe solution which breaks down the structure of the gum allowing it to be safely removed from a variety of surfaces without causing damage.

John McCandless, Chairman of Expelliere International, said: “The blight of discarded chewing gum has been with us virtually since chewing gum was first mass produced from the turn of the last century.

“Many attempts have been made to find a way of removing unwanted gum but to date a commercially viable solution to the problem has not been found.

“We believe xpelgum is that solution and the extensive testing we have carried out to date with organisations in the leisure, retail, hospitality and contract cleaning sectors has confirmed our belief that we have developed a product with true global appeal.

“We have already taken a significant number of advance orders based on our trial activity which gives us a great deal of confidence in the future of the product.”

Invest NI has offered Expelliere International over £100,000 to assist with export marketing and wider business support.

Ian Murphy, Invest NI Director of Growth and Scaling said: “This forward thinking company has demonstrated that global markets are within the reach of all firms regardless of size or sector.

“I hope that other firms are similarly encouraged to seek out export opportunities and secure the future of their business.”

The innovative chemistry on which xpelgum is based (super solvents) has already been recognised as the most important British Invention of the 21st century by the Science Museum, even beating the historic Higgs Boson discovery in a public vote.

A team of over 100 scientists at Queen’s University Ionic Liquid Laboratories (QUILL) has been developing the technology of these ‘green’ solvents.

And with global patents already in place for xpelgum for the next 20 years, Lisburn-based Expelliere International is confident that the menace of discarded chewing gum on streets all over the world will soon become a thing of the past.

More details are available at www.xpelgum.com