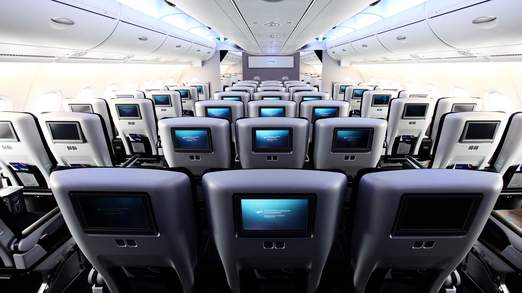 British Airways handout photo of the interior of the new Airbus A380, the world’s largest passenger plane, at Heathrow Airport, as BA became the first UK airline to take delivery of the massive superjumbo. PRESS ASSOCIATION Photo. Issue date: Thursday July 4, 2013. See PA story AIR Superjumbo. Photo credit should read: British Airways/PA Wire NOTE TO EDITORS: This handout photo may only be used in for editorial reporting purposes for the contemporaneous illustration of events, things or the people in the image or facts mentioned in the caption. Reuse of the picture may require further permission from the copyright holder.