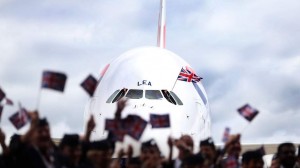 British Airways wave flags in front of a British Airways Airbus A380, the world’s largest passenger plane, at Heathrow Airport, as BA became the first UK airline to take delivery of the massive superjumbo.

SUPER-JUMBO aviation has arrived in the UK today with the delivery to Heathrow of British Airways’ first A380.

The airline is the first UK carrier to take delivery of the double-decker, which is the world’s largest commercial jet. British Airways is also the first airline in Europe to operate both the A380 and the Boeing 787 Dreamliner, the first two of which landed at Heathrow last week.

The airline announced today that the very first long-haul flight on the A380 to Los Angeles will be on September 24, 2013 with prices starting from £621 return, and the first to Hong Kong will be on October 22 with prices from £688 return.

Keith Williams, British Airways’ CEO, said: “We are delighted to welcome the first of our A380s to the fleet, joining our new 787s.

“These aircraft are the start of a new era for British Airways. Over the next 15 months, we will take delivery of new aircraft at the rate of one a fortnight as we put ourselves at the forefront of modern aviation.

“The A380 is a fantastic aircraft and an excellent showpiece for British engineering. Our customers are going to love the space, light and comfort on board.” 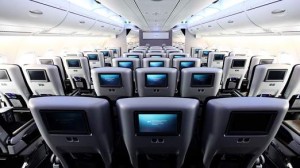 The interior of the new A380

The aircraft’s innovative design makes it much quieter during take-off and landing and 16 per cent more fuel efficient than a Boeing 747. British Airways has ordered 12 A380s for delivery by 2016. Three will arrive this year followed by a further five in 2014.

Both aircraft types will now begin a complex ‘entry into service’ programme, which will see pilot and cabin crew training taking place at Manston Airport in Kent, customer service trials at Heathrow and short-haul flying for both aircraft, including flights within the UK.