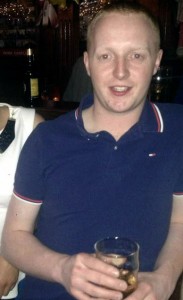 LOCAL people have dug deep into their pockets to raise over £40,000 to help bring a talented footballer back home to Northern Ireland.

Belfast Daily reported yesterday that family and friends of Kevin Bell who was killed in a hit-and-run accident in the US have set up a fund to help fly his remains home.

Kevin Bell, 26, was hit in the early hours of Sunday morning shortly after leaving a bar in The Bronx district of New York.

Within hours of his tragic death, friends rallied to his family’s plight and started a fighting fund to pay for the flight to bring him home.

As a result, around £42,000 has been raised and Kevin’s remains will be repatriated to Northern Ireland today.

His funeral will take place in Newry at noon on Saturday.

Mr Bell’s friend, James McCaffrey, said a fund had been set up to help the family pay the costs of bringing his body home.

“It’s hard enough to grieve in a circumstance like this, but it’s definitely an added pressure to come up with such funds at such short notice,” he said.

“There’s so much logistics that need to be done, with regards to just getting him home and say the final farewell.”

Locals in The Bronx district were furious when the remains of the Newry soccer player Kevin Bell was then stuffed into the back of a city Medical Examiner’s Office van — next to bags of recyclable bottles. 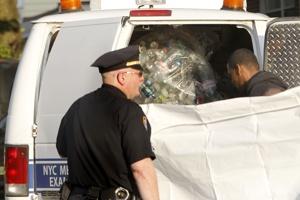 Kevin Bell had been drinking with pals on the Upper East Side before returning to his Woodlawn neighbourhood alone at around 3:30 am on Sunday morning.

“It was a grey sedan. By the time I got there, there was blood dripping down the side of his face.

Back home in Northern Ireland, the family of Kevin Bell have remembered him as a “man of many talents” who touched people’s lives.

Kevin, from Killeavy, near Newry, who worked as a butcher, was knocked down in the Bronx district early on Sunday.

He was pronounced dead after being taken to hospital.

Relatives have also spoken of the huge amount of support they have received from the local community.

Mr Bell’s brother-in-law, Paul McParland, said: “His family were involved in a lot of things, from Gaelic football and the arts. He was a butcher in a local shop in Newry.”

He said two members of the family were travelling home from Australia.

“There’s been a huge amount of support from the local community and all over the world,” he added.

“Kevin was a well travelled fellow, everywhere he went he has touched people. ”

Another friend, Niall Duffy, said the support given to the family was an indication of Kevin’s popularity.

“It’s just phenomenal. The amount of people that knew him and thought highly of him. It’s a real reflection of what sort of person he was,” he said.