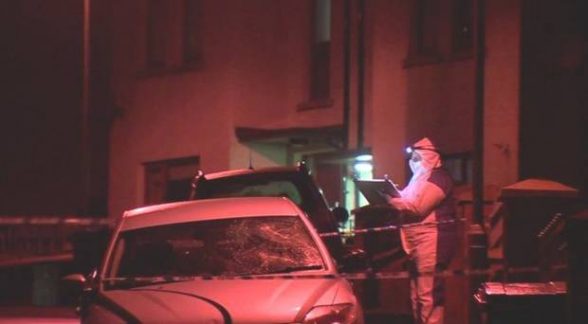 CSI officers at the scene in Forkhill after traveller feud incident. PIC: BBC

DETECTIVES  at Ardmore police station are investigating incidents in South Armagh last night, Tuesday, October 15,  where one man was assaulted and a second male sustained a gunshot wound to his stomach.

One line of inquiry by police is that the incident is the latest in a long running feud between rival family members over the last year.

Detective Inspector Handley said: “Shortly before 6.20 pm, we received a report that a number of men, possibly up to four, arrived by vehicle in Park Urney in Forkhill and attacked a parked car.

“The male occupant of this vehicle, aged 54, managed to get out but, as he attempted to run away, he was assaulted.

“We believe he may have been struck on the head with a firearm, and subsequently sustained minor cuts to his head.

“As he continued to run away, he was chased by his attackers.

“One of the suspects, aged 37, is reported to have fallen and sustained a gunshot wound to his stomach.

“At around 6.31 pm, it was reported this injured male who sustained a gunshot wound was driven to Daisy Hill Hospital in a blue Honda Accord where he was left outside before the vehicle sped off.

“At around 8.20 pm, it was reported that a Blue Honda Accord had been discovered burnt out in Mourne View Park in Newry.

“Both victims were taken to hospital last night.

“The man who sustained the head injuries has since been released, while the second male who sustained a gunshot wound has undergone surgery and remains in hospital this morning where his condition is described as critical but stable.

“This was a reckless series of events and it only by sheer luck that we are not dealing with a tragic situation today.

“Two men ended up in hospital, however, anyone who was in the vicinity last night could well have been caught up in this and injured.

“Our investigation into these incidents is underway and we are working to establish a motive for what occurred.

“I want to take this opportunity to make a number of appeals this morning and urge anyone with information that may help our investigation to pick up the phone and tell us what you know.

“Were you in Park Urney in Forkhill last night between 6 pm and 6.30 pm?

“Did you see a Blue Honda Accord in the Park Urney area of Forkhill, or in the Hospital Road area in Newry around 6:30pm; or did you capture this vehicle on your dash cam? Did you see  what occurred?

“Were you at Daisy Hill Hospital last night around 6.30 pm?

“Did you see anything out of the ordinary, in particular a Blue Honda Accord in the Accident & Emergency area.

“And, finally, were you in the Mourne View Park area of Newry around 8.15 pm night where a Blue Honda Accord was found burnt out?

“Did you see any suspicious activity, including vehicles or persons?

“If you have information, please call our detectives at Ardmore on the non-emergency number 101, quoting reference number 1628 of 15/10/19.”

Alternatively, information can be provided to the independent charity Crimestoppers on 0800 555 111, which is 100% anonymous and gives people the power to speak up and stop crime.