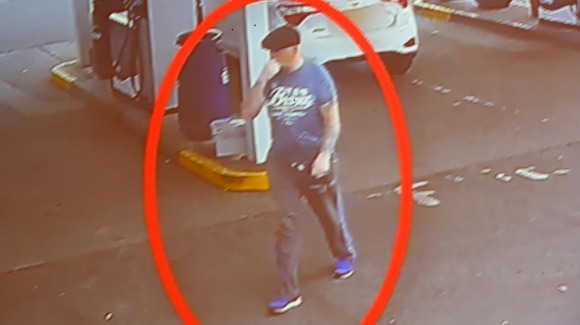 Malcolm McKeown a short time before he was shot dead

DETECTIVES investigating the murder of loyalist drug baron Malcolm McKeown in Waringstown in August have today released a photograph of a man driving the blue Passat that is believed to be involved.

Detective Chief Inspector Peter Montgomery is also making a number of fresh appeals for information about the chilling murder of the 54-year-old carried out at close range in broad daylight on August 19th.

He said: “My investigation into the cold and calculated murder of this father-of-three is continuing at pace.

“I now believe there were several people involved in his killing.

“In every murder there are people involved in different aspects of the crime including planning, targeting, supplying weapons , transporting the weapons away from the scene and the clean-up operation.

“I have released a photograph of a man  who appears to be wearing a baseball cap, as he drives into Dewarts Garage shortly before the murder at around 7.19 pm.

“Mr McKeown was shot up to six times just minutes after he left the shop at the petrol station and I suspect that two guns were used during the attack.

“His body was found slumped in his parked car at the side of the garage at around 9 pm.

“I believe that  the gunmen were alerted to Mr McKeown’s movements that night and they likely had knowledge that he would be at the petrol station at that specific time.

“I believe the gunmen waited in it at the back of the filling station for around 56 minutes before shooting Mr McKeown.

“The CCTV shows the vehicle leaving Dewarts Garage at 7.19pm.

“I would still like to hear from anyone who saw the car, or the people inside the Passat during these times.

“Were you at the garage, or were you driving in the area and have dash cam footage?

“The car was later found burnt out on the Glenavon Lane in Lurgan at approximately 7.26pm.

“Did you see the occupants get out of it and set it on fire? If so, do you know where they went?

“There was football  training and trials ongoing nearby so there may be some parents who witnessed the Passat being set on fire.

“I am also still very interested in tracing a grey Volkswagen Golf S which was seen in the Greenhill Park area of Lurgan between 5pm and 7.30pm on the Monday evening.

“This vehicle left Greenhill Park and drove on to Mourne Road.  Did you see this car? Did you see where it went?

“I also wish to  reassure the public that if they have any information that it will be treated in the strictest confidence and for the purpose of my investigation I can guarantee them anonymity.

“Alternatively, information can be provided to the independent charity Crimestoppers on 0800 555 111, which is 100% anonymous and gives people the power to speak up and stop crime.”