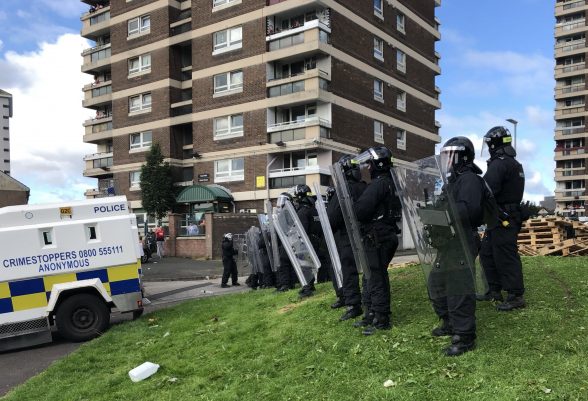 POLICE investigating anti-social and criminal behaviour in the New Lodge area of north Belfast over the summer months say officers have been “working tirelessly to bring those responsible before the courts”.

To date officers have arrested 11 people, 10 of whom were subsequently charged to appear at court.

In addition to this files have been prepared in respect of nine other people for the attention of the Public Prosecution Service and further interviews with suspects are planned.

The worst of the trouble surrounded an August  bonfire in the area.

But police later withdrew after the council decided not to remove the bonfire for fears of public safety.

Chief Inspector Kelly Moore said: “It is critical that the people who chose to engage in this dangerous, criminal anti-social behaviour understand that it is unacceptable.

“There is no place for it in a civilised society.

“They do not represent their community; the people of north Belfast deserve better.

“I would like to assure the community that it does not matter how long ago offences were committed we will go where the evidence leads us.

Chief Inspector Kelly Moore added: “To those who were involved in this anti-social behaviour – we have not forgotten about it.

“And to the community of north Belfast – we will continue to deploy our resources where needed and work alongside our partner agencies, local representatives and the community to keep people safe.

“I would appeal to anyone with any information about anti-social behaviour or disorder to contact police on 101.