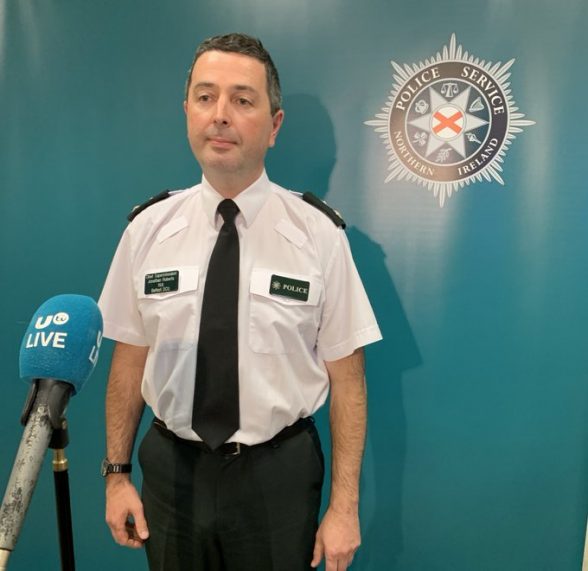 A SECURITY operation in North Belfast will last into Tuesday following the discovery a deadly device, police say.

The device was found at Holy Cross Boys Primary School in north Belfast on Monday afternoon by the principal and caretaker.

The device was found under a sewage man-hole cover, in a plastic package in a garden area of the school.

Army Technical Officer have spent the evening trying to make the device safe.

Chief Supt Roberts said the device was an “improvised weapon” which had the potential to fire a “high calibre round”.

The senior officer has apologised after 300 children had to be evacuated from the school following the discovery of the lethal weapon.

But he says there will be further disruption to the school on Tuesday and will remain closed as ATO continue to make the device safe.

“Our working theory at this time is that this weapon was most likely to have been left there by dissident republicans terrorists,” he said.

“I would like to apologise for the inconvenience that was caused to the students, parents, school staff and the wider community.

“I hope they will understand and accept it was necessary that we be absolutely satisfied that there was no ongoing risk to children in the immediate area.”

He condemned those who left the weapon in the grounds of the school.

“What they have done is endanger the lives of children,” Chief Superintendent Roberts said.

“The device was left in the immediate area where the youngest children who attend school would be playing during the course of the school day.

“A very, very dangerous act and I would appeal for anybody who has any information to contact the police.”

Chief Superintendent Roberts said that the PSNI’s Terrorism Investigation Unit had launched an investigation into the weapon “its history and who may have left it there”.

“It’s very important, particularly given the circumstances where it was left in the immediate area where children were playing that anybody with information contacts the police,” he said.

School principal Kevin McArevey spoke of his shock at discovering the object.

“I was helping the caretaker with some sewage problems out the back of the school, in the nature garden and we had to lift a manhole cover to get the rods down and to my surprise, there was a plastic package just sitting in the sewers.

“I lifted it out and imagine my surprise when I opened it up, there was wires at the top of this and tubing in it.

“It was a scary moment for both of us.”

He added: “We had cleared out the sewers three years previous, it was put in there within the last three years.

“Whoever left this device should consider their reckless disregard for the health and wellbeing of the children who would regularly use the nature garden.”