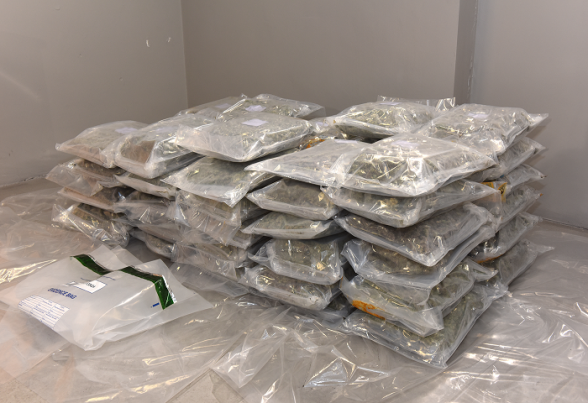 THREE men who pleaded guilty to their roles in a £1 million herbal cannabis smuggling racket have been jailed.

The drugs were seized in Dromore, County Down, in March 2018 after police searched a fuel tank that had been modified to contain the drug.

It had been transported from Spain via the Republic of Ireland.

The seizure followed a cross-border operation between the PSNI, Gardaí and HM Revenue and Customs officials.

James McAleese, of Terryhoogan Road in Scarva was described in court as the man behind the crime.

The 44-year-old received a three-year sentence.

Kevin McPolin, 33, from Linenfields in Banbridge, drove the drugs across the Irish border.

He received a 30-month sentence.

Judge Gordon Kerr QC said his culpability was less than the others, partly due to his low IQ.

Half of their sentences are to be served in custody and the other half on licence.

“This success follows the seizure of a significant quantity of cannabis with an estimated street value of around one million pounds which was found concealed inside a large fuel container on a trailer at a property in County Down on 30 March 2018.

“£1,500 cash and documentation was seized following a further search of a property, also in County Down.

“By working with An Garda Siochana, they were then able to identify where the container containing the drugs had entered the Republic of Ireland.

“Through further comprehensive investigative work it was established that McAleese was instrumental in organising the container’s entry into the Republic of Ireland and its further transportation into Northern Ireland.

“Through collaboratively working with our colleagues in An Garda Siochana under the banner of the Cross Border Joint Agency Task Force (JATF), we were able to take these drugs out of circulation and identify those involved in the supply chain.

“By disrupting their activity, this has also meant that many more drugs have not been imported into Northern Ireland over the past year.

“This demonstrates our continued commitment to both preventing dangerous drugs from ending up in local communities and pursuing those intent on destroying lives through the supply of illicit drugs.

“The Cross Border JATF has played a crucial role in tackling the importation and supply of drugs in both jurisdictions.

“Over the last twelve months, 5.3 million pounds worth of drugs, 3.5 million pounds of assets and 11 firearms have been seized during operations coordinated by the Cross Border JATF.

“There continues to be debate within society and some people think that spending money on some cannabis isn’t a problem, but this couldn’t be further from the truth.

“I want people to think about where their money is going before they hand over cash for recreational drugs.

“Any money that you hand over for drugs, no matter how small, goes to fund the misery inflicted in our communities by drug dealers.

“People who deal drugs don’t care about the devastation that addiction causes – their primary concern is with lining their pockets.

“Mallon, McPolin and McAleese are criminals pure and simple; their only aim was to line their own pockets.

“We will continue to investigate those who profit from the harm caused by illegal drugs.