BUSINESS CONFIDENCE SOARS IN IT DESPITE ‘BREXIT EFFECT’ 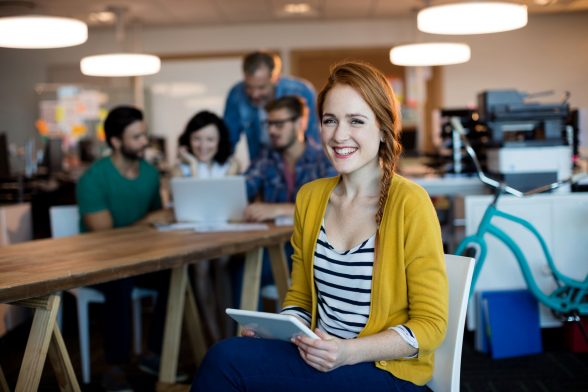 A REPORT, which acts as a barometer for the local jobs market indicates that although job hiring is slowing slightly, the IT sector is showing no sign of a slump.

Belfast remains a key location for global companies to invest and have access to a talented workforce.

The latest NIJobs.com Jobs Report with Ulster Bank demonstrates unsurprisingly that the jobs market is experiencing a ‘Brexit bump’ with a drop of 9% in Q2 listings compared to previous record highs but a small YoY rise of 3%.

Skilled IT professionals can expect multiple career opportunities within the sector, which is growing rapidly. IT vacancies account for 1 in 8 of all listings in Q2. Over the last two years the number of IT listings has increased by 51%.

According to an analysis by NIJobs.com, the most in-demand roles currently include AI (Artificial Intelligence), Cybersecurity and UI/UX Designers.

Sam McIlveen, General Manager of NIJobs.com, provides context for the latest data: “The top line figures are certainly illustrating the impact of Brexit. Our Job Report is an indicator of what is happening and is not a forecast so it’s no surprise to see current uncertainty reflected in the quarterly figures.

“The year on year growth in jobs remains positive and is a reflection of the resilient and industrious nature of businesses in NI.”

After IT, the Social, Charity & Not for Profit; Production, Manufacturing & Materials; Hospitality and Engineering sectors posted the largest number of job vacancies.

Sam continues: “Over the last two years the number of IT jobs advertised on NIJobs.com has increased by 51%.  It’s clear that many world-class tech and fintech companies view Northern Ireland as an excellent location with superb access to a young and well educated workforce.

“That’s in no small part due to the hard work of organisations such as Invest NI. The importance of the IT sector to NI cannot be overstated, a recent report from Queens University* found that the cyber security industry alone in NI is on course to generate salaries of over £70 million each year while employing 1,700 people.

“The IT sector will continue to go from strength to strength powered by a pipeline of skilled tech graduates. The challenge right now for recruiters is to source the key talent they need to fill roles particularly in high growth areas such as AI and cybersecurity.

“We are working closing with leading companies such as Proofpoint, Kainos , Allstate ,SpotX and Slice to ensure they can showcase their jobs to these much sought after professionals.”

Looking ahead, the demand for IT roles is likely to grow significantly and NIJobs.com forecasts a number of growth areas: AI +107%, Cybersecurity +114%, UI/UX Designer + 92%, QA Engineer + 72% and Android Developers +57%.

Tom Keating, VP Engineering and Belfast Site Leader at Proofpoint, says: “Our Belfast team is one of our largest locations outside the United States. We anticipate further growth as we continue to be the centre of excellence.

“It has been very encouraging to see Northern Ireland acknowledged for its cybersecurity expertise and has reaffirmed our decision to grow our presence here.

“Local universities, technical colleges and meet up groups have created an environment for technical talent to flourish. For those who are interested in pursuing a career in this area, there is a wealth of exciting job opportunities.

“Our Belfast team play a key role in protecting some of the best-known brands and largest companies in the world from cyber-attacks and work with some of the best minds in the industry globally.

“It’s crucial for our business to employ the best engineers and developers in order to provide products and services for top broadcasters, advertising agencies and brands globally.

“Belfast has evolved into a major hub for IT companies, so the demand and competition from companies seeking software engineering and related skills are extremely high. Candidates now have a wealth of different career options.”

Richard Ramsey, Ulster Bank’s Chief Economist, says that the market may well be coming off the boil but it’s still hot: “The official labour market statistics chimed with the Q1 NIJobs.com Jobs Report – which revealed a record number of job listings.

“The key question is how long can this winning streak of employment growth continue?  At the mid-point of 2019, there are some signs that the local labour market is coming off the boil.  Given the range of skills shortages and wage pressures evident, this situation will be welcomed by many employers.

“Ulster Bank’s Northern Ireland PMI survey signalled a reduction in private sector staffing levels in both Q1 (modest) and Q2. Similarly, the latest NIJobs.com Report reveals an easing back in hiring intentions in Q2 following the record number of listings in the previous quarter.

“The number of job vacancies advertised fell by 9% q/q which marked the sharpest quarterly decline since Q4 2016. Twenty-two of the thirty-two employment categories posted quarterly declines in listings while eighteen reported a year-on-year decrease.

“With these business conditions in Q2 coupled with ongoing Brexit uncertainty, the second-half of the year is not expected to see the labour market strengthen as in the previous three years. Nevertheless, any weakening in the labour market must be viewed as coming from a position of strength.

“Given that recent graduates will be embarking upon various career paths, it’s worth noting that a decade ago was the worst time in a generation to enter the labour market. Conversely, local graduates today have an unrivalled skillset that now ten years on is sought after by global brands who are investing heavily in the local marketplace.”