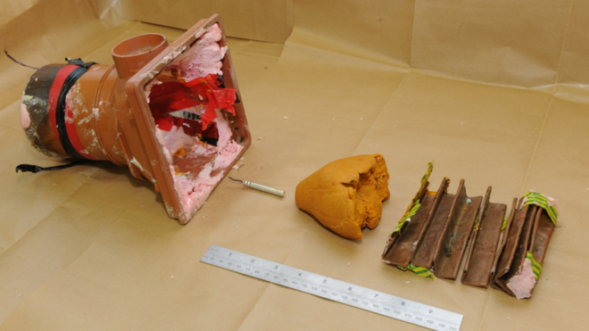 A 25 year old man was today sentenced to six years in prison for his part in what police believe was a terrorist murder plot.

Luke O’Neill, of Silverwood Green in Lurgan, was arrested in the town in September 2016 during an undercover police operation by the PSNI’s Terrorism Investigation Unit investigating dissident republican terrorist activity.

The device uncovered was the first of its kind found in Northern Ireland by police.

Unknown to the gang, police had mounted a covert surveillance operation. planting secret video and recording equipment in the property.

Added DI Orr: “We believe that our operation saved lives and undoubtedly made the community safer.

“The sentence handed down to Luke O’Neill today should send a clear message to those involved in perpetrating dissident republican terrorist criminality that PSNI is dedicated to halting their despicable activities and placing them before the courts to answer for their crimes.”