JUST THREE WEEKS TO GO TO THE 148TH OPEN 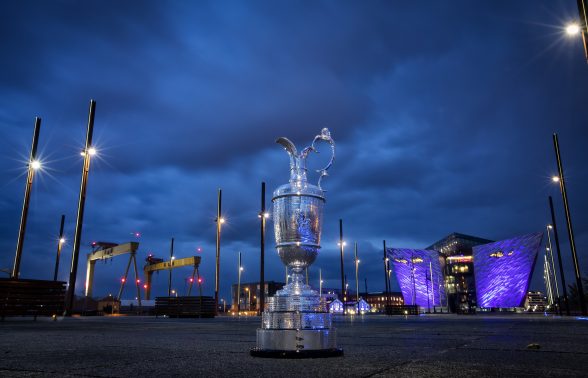 With just three weeks to go to The 148th Open at Royal Portrush, the iconic Claret Jug is featured against an iconic Northern Ireland and Belfast backdrop. The 148th Open is being widely welcomed as a showcase of epic proportions, not only for the golf club but for the town, for the Causeway Coast and Glens area and for Northern Ireland as a whole.

AFTER a wait of nearly 70 years, the much anticipated return of The Open to Royal Portrush is just three weeks away.

The 148th Open at Royal Portrush is being widely welcomed as a showcase of epic proportions, not only for the golf club but for the town, for the Causeway Coast and Glens area and for Northern Ireland as a whole.

As the battle for the famous Claret Jug and title of Champion Golfer of the Year unfolds on the North Coast, the sport’s greatest players, including Northern Ireland’s home-grown heroes, will be welcomed and inspired by approximately 215,000 local, national and international golf fans, who will relish every moment with passion and pride.

The setting, atmosphere and drama of The Open in Northern Ireland will be beamed into an estimated 600 million homes worldwide, promoting the best of what the region has to offer and enhancing our reputation as a premier destination for international events.

The biggest sporting spectacle ever to be staged here has been more than five years in the making, and the combined economic benefit from hosting golf’s original championship will be felt for years to come.

Tourism NI CEO John McGrillen said: “The hosting of The 148th Open is another huge ‘Team NI’ effort that has involved a considerable amount of work and planning between Tourism NI, The R&A and a wide range of partner organisations, firstly to secure the Championship but also to ensure its promotion, smooth running and the delivery of a pay-off for tourism in the future.

“The waiting is almost over and with a team of 6,000 staff and 350 volunteers preparing to warmly welcome visitors in three weeks’ time, Northern Ireland stands proud, ready to stage and to savour this major festival of golf.

“We are a country at the forefront of the game, a place that nurtures golfing superstars and a destination that offers world-class golf courses and outstanding events.

“I am confident that The 148thOpen will be remembered by players and spectators alike as one of the highlights of the Championship’s long and illustrious history.”

Martin Slumbers, Chief Executive of The R&A, said, “Ever since we announced the return of The Open to Royal Portrush there has been huge excitement and the sense of anticipation is continuing to grow now that the Championship is only three weeks away.

“It will be the biggest sporting event to be held in Northern Ireland. Millions of people around the world will be watching on television as well as tens of thousands of fans lining the fairways as the world’s best golfers take on this wonderful links.

“We are extremely grateful for all the support we have received from the government and public agencies in Northern Ireland and we are looking forward to a truly historic Open Championship.”

While all four Championship Day tickets are completely sold out, there are still a small number of practice day tickets and hospitality packages available.

A limited number of camping places at The Open Camping Village close to Portrush are also available for ticket holders.

For those lucky enough to have a ticket, the message from The R&A is to remember to bring them on the day you are attending The Open.

For some, this will require the downloading of tickets to their mobile phones or printing them off at home. All other tickets will be sent to purchasers in advance of the Championship.

The 148th Open – advice for spectators