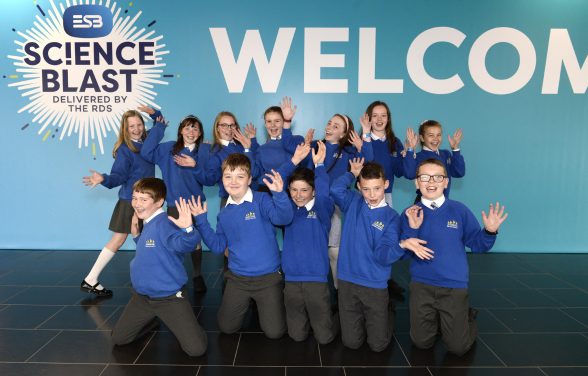 Pupils from Lisnasharagh primary school in Belfast pictured at ESB Science Blast which took place today at the ICC Belfast. Managed and operated by the Royal Dublin Society, ESB Science Blast harnesses children’s natural curiosity to get them interested in the science and maths of the world around them. Picture by Presseye/Stephen Hamilton

Taking place at ICC Belfast (Waterfront Hall) on June 5 & 6 ESB Science Blast is operated by the Royal Dublin Society, and over the two days it hosted nearly 60 Key Stage 2 primary school classes who displayed their findings to puzzling questions they had investigated.

Investigations included: Will the earth ever run out of Magma? How can a ship like Titanic float on water? What do plants eat? How do clouds make it rain?

ESB Science Blast is one of the biggest science events on the island of Ireland with approximately 12,000 primary school students and their STEM projects involved across three ESB Science Blast showcase events this year in Belfast, Dublin and Limerick.

The event is a non-competitive education programme managed and delivered by the Royal Dublin Society (RDS) and endorsed by CCEA (Council for the Curriculum, Examinations and Assessment).

With an underlying ethos of encouragement through whole-class participation, the constructive feedback received from judges who work across science, education and STEM industries gave primary school students the opportunity to engage with STEM professionals. 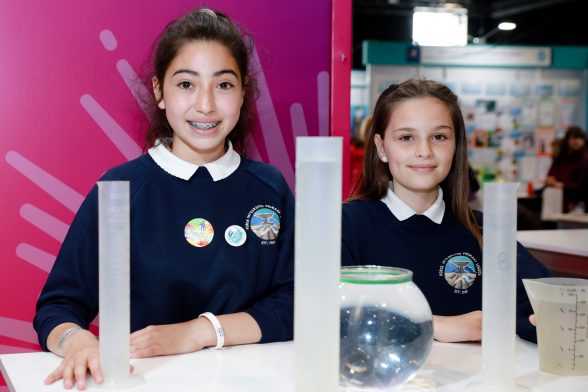 In addition to showcasing their research the children enjoyed educational science shows where they learned about their natural environment and how to dispose of waste, the science behind food and even received a tour of the solar system.

Michael Duffy, Chief Executive of the RDS: “We know that participation in ESB Science Blast is a huge boost for students’ ability and confidence in science and maths.

“But we have also found that there are many other benefits too in areas of teamwork, communication and creative thinking.

“This is our third year in Belfast but our first as ESB Science Blast and we have been delighted with all the work that the students have put into their investigations, with some great help from their teachers who are vital to the programme’s overall success.

Jerry O’Sullivan, Deputy Chief Executive ESB spoke about the partnership with RDS and a shared commitment to promote STEM education and learning.

“Participation in events like ESB Science Blast helps to equip children with the crucial 21st century skills, supporting them not only to become creative and innovative problem solvers, but also active and engaged citizens, capable of making informed choices to tackle climate change and other global challenges.”

Colette Murphy, Science and Maths Education Professor at Trinity College Dublin addressed a breakfast of STEM and education stakeholders: “Science Blast is an amazing way for children to learn.

“It is one of the best examples of science learning that I have seen and it also has so many other benefits for the participating students. Scientists work the same way as children, playing, experimenting, finding things out, all are part of the everyday experience for both children and scientists.” 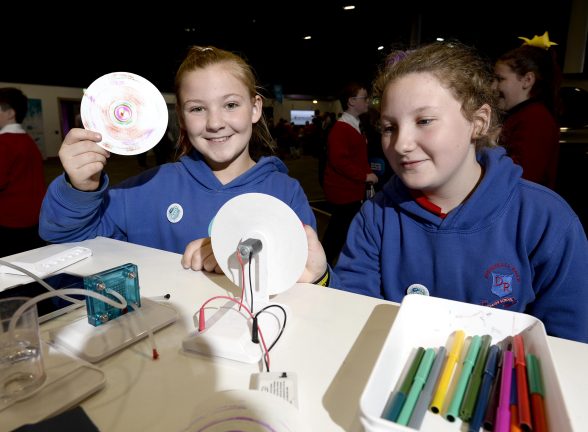 Brook Gray and Tia Morrison from Donegall Road primary school pictured at ESB Science Blast which took place today at the ICC Belfast. Managed and operated by the Royal Dublin Society, ESB Science Blast harnesses children’s natural curiosity to get them interested in the science and maths of the world around them.
Mandatory Picture by Presseye/Stephen Hamilton