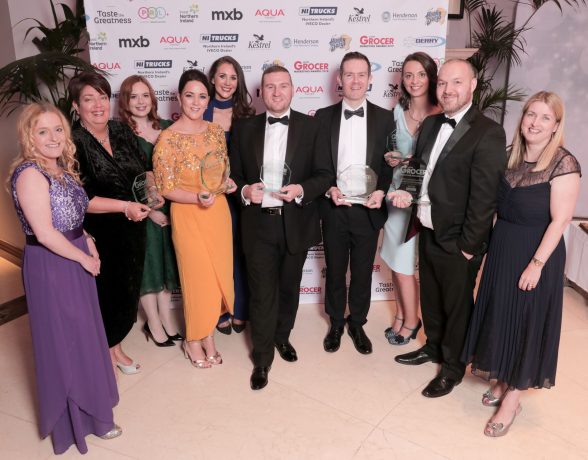 LEADING family owned business, Musgrave NI which owns the SuperValu, Centra and Frank and Honest brands, celebrated success at a recent awards ceremony, where they picked up three top awards for their work across Northern Ireland.

The company and its leading brands won three of the eight awards they were shortlisted for at the Ulster Grocer Marketing Awards at the Culloden Estate and Spa on Friday 10th May and were highly commended for three more.

SuperValu clinched the coveted Best CSR Initiative / Charity Partnership for its SuperValu SuperStars initiative, which celebrates the unsung heroes in communities across Northern Ireland and was highly commended for its SuperValu Signature Tastes campaign in the Best Product Launch category.

Meanwhile, Centra picked up the award for Best Digital Marketing Campaign for its Centra Live Well initiative, which was designed to motivate and inspire individuals and communities across Northern Ireland to get active and eat well.

Both SuperValu & Centra were Highly Commended for their Christmas Lapland in the Best In-Store promotion category.

It was also a big night for the company’s artisan coffee brand, Frank and Honest, which picked up the award for Best Green Marketing Initiative for its compostable cups initiative and was highly commended in the Best Brand category.

Frank and Honest is now the largest-selling on-the-go coffee brand on the island of Ireland based in over 700 locations across the island, with over 110 of these in Northern Ireland.

In 2018, sales objectives were exceeded, with over 2.5million cups of Frank and Honest coffee sold in the first two years. Feedback from customers and retailers alike continues to exceed expectations, with the vast majority stating that Frank and Honest is the best ‘on-the-go’ coffee on the market.

The brand was also the first national coffee brand to introduce compostable cups; an initiative that will potentially divert millions of coffee cups from landfill annually.

Commenting after the Awards, Brendan Gallen, head of marketing, Musgrave NI said: “We’re proud to be recognised for our work across SuperValu, Centra and Frank and Honest brands at the leading grocery marketing awards in Northern Ireland.

“To win three of the most hotly contested categories and be highly commended for a further three Awards, is no mean feat.

“While these awards are recognition of the strength of the brands and our marketing campaigns, it goes without saying that it is the hard work of our retailers and store managers that ensures that our brand promise and values are lived out for our shoppers.”

The Ulster Grocer Marketing Awards took place at the Culloden Estate and Spa on Friday 10th May and were hosted by TV personality Claire McCollum.