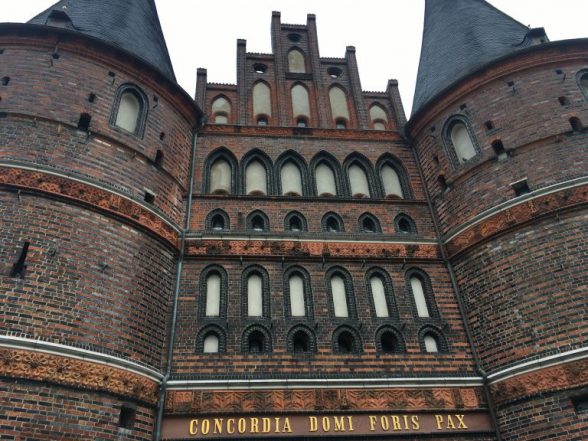 Only an hour away from Hamburg lies a very interesting town, sitting on the edge of the Baltic Sea this town packs a serious punch. Lubeck is home to the Marzipan capital of the world.

When one talks of marzipan I don’t mean the thick horrible stuff you might have been given on an Aunt’s Christmas Cake, I’m talking about the delightful Almond marzipan paste that is made into some of the world’s finest confectionary in this fascinating port.

In Lübeck, the success story of Niederegger started over 200 years ago and even today it is a tradition-conscious family business. The owners Mrs Angelika Strait-Binder and Mr Holger Strait are managing the company which is now

The confectioner Johann Georg Niederegger started his own confectionery in Lübeck in 1806, gave it his name, and created the recipe of Niederegger Marzipan which is still used today.

In 1822 the successful businessman bought the head office opposite the steps of the town hall in the Breite Straße which since then has been the location of the Niederegger Café. The Niederegger Marzipan Parlour was opened there in 1999.

Already under the lead of the original founder Niederegger delicacies were delivered to Russian Tsarist household and Niederegger Marzipan was awarded the gold medal at the Vienna World Exhibition (1873), one of the numerous awards.

In 1908 the Marzipan specialist established himself as a purveyor to the court of the German Emperor.

In 1921, Professor Mahlau created the ‘corporate design’ which is still used today including the company logo, the initials of the founder (J.G.N.) and the symbols of Lübeck in white, red and gold. The 200-year long success story of the house of Niederegger is carried on to this day.

Many stories and myths surround the origin of marzipan. With constant regularity newspapers at Christmas retell the legend of the famine in Lübeck in 1407, which led to the discovery of the Marcus Bread, the Marci panis. Back then, according to the legend, the storehouses of Lübeck were searched for food supplies.

From the remains of almonds and sugar, they prepared an almond meal, moulded them into bread loaves (Latin Pan), and distributed it on St. Mark’s day to the needy population. This legend appears everywhere where this sweet confectionery is widely produced and it’s only the date that changes, but it’s a nice story.

On the other hand, it is quite certain that the origin of marzipan is found in the Orient where ladies of the Harem enjoyed this delicate almond-sugar mixture.

Initially, these sweet specialities reached Spain and Portugal and were then brought by the Crusaders to the rest of Europe via the trading centre of Venice.

At first, marzipan was exclusively produced by pharmacists in Germany as it was considered a reputable medicine until the 18thcentury.
In 1714 confectioners in Lübeck were given permission to produce marzipan, however, due to the high price of sugar, it was an unaffordable luxury for the ordinary citizen, even until the beginning of the 19thcentury.

Things changed when the first sugar beet factory started mass producing and for the first time sugar and then subsequently marzipan was affordable for the wider population.

The success story of the House of Niederegger began almost at the same time.

Today Niederegger Marzipan is counted among the more exclusive confectionery as only almonds of the highest quality are used as the main ingredient. Having visited in late March 2019, I can advise if you get the chance to try some you will never try another brand as its simply delicious.

Lübeck itself was founded in 1143 as the first port on the Baltic Sea and quickly developed into the rich and mighty “Queen of the Hanseatic League”.

The Old Town island is one of the most beautiful examples of the red-brick Gothic style of Northern Germany. The seven church spires have dominated the city’s silhouette since the Middle Ages.

In addition to the famous Holsten Gate, it is worth wandering into the historic Town Hall, the salt storage buildings, which were used to store the “white gold”, the Hospital of the Holy Spirit, the impressive merchants’ houses and the medieval alleys and courtyards.

The archaeological subsoil of the Old Town with around three million finds is also part of the World Heritage Site.

Around three-quarters of the Old Town survived the War almost untouched despite the devastating air raid of 1942. Then in 1944, Lübeck was declared as the supply port of the International Red Cross and this made it off-limits to further bombing raids.

This resulted in many charitable foundations, such as the Füchtingshof, which offered refuge to impoverished widows and orphans.

The little alley houses in the rear courtyards of the Old Town are a special tourist attraction – spruced up like little doll’s houses, they make popular holiday apartments. The humble wooden huts used to be home to servants, simple seafarers, or were rented by small businesses, and could not even be heated because of the fire risk. 70 of these historic alleys and courtyards have been preserved to this day and are an integral part of many guided tours.

Sometimes it takes two princes to wake a sleeping beauty with a kiss.

of the management of the Seafarers’ Guild.

The proud gabled house opposite the seafarer’s St. Jacob’s church has been a home for mariners since 1535 and, since 1866, has also been home to one of the city’s most famous restaurants.

It is this special atmosphere of real history that makes a visit to the Seafarers’ Guild such a unique experience to this day. Yet, even timeless beauties need a live-cell therapy from time to time.

“Combining the tradition of the building with modern everyday life requires a lot of sensitivity”, stresses Frank Höhne. The two new bosses are focussing on “fresh, affordable cuisine of the highest quality”. The menu, which is laid out like a newspaper, is changed every one to two months and can also be taken away as a souvenir.  The 51-year-old is especially proud of his Southbend Grill, which he uses to “prepare the perfect steak”. The house brand “The Captains” is also new.

Beers, wines, sparkling wines and spirits are all available under the maritime name, which you will find all over the establishment.

The garden in the inner courtyard, which is accessible directly from the Engelsgrube, is the place to sit in summer. While listening to Frank Höhne talking about the many innovations and crucial little things, you have a good feeling that the balancing act between preserving and modernising has been achieved with great success. Give it a try!  http:// www.schiffergesellschaft.de

Whether you’re looking for well-known brands or regional products, modern shopping centres or unique boutiques – you’re bound to find what you want in Lübeck.