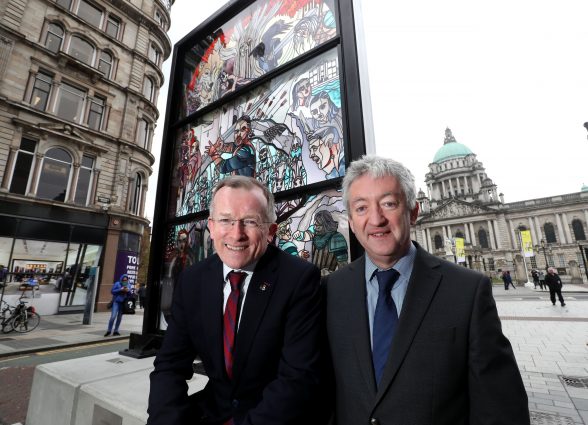 The impressive installation is part of Tourism Ireland’s brand new Game of Thrones® campaign – to showcase and celebrate Northern Ireland as Game of Thrones® Territory to millions of fans worldwide.

This is the first of six installations to be unveiled over the coming weeks.

After a decade of filming and production in Northern Ireland, Game of Thrones® is finally drawing to a close.

Timed to coincide with the eighth and final season, the campaign – called ‘Glass of Thrones’ – has been created by Tourism Ireland and Tourism NI in partnership with HBO.

It kicks off today and will roll out to millions of fans in ten markets – including Great Britain, the United States, Canada, Australia, France, Germany, Spain, Italy, the Netherlands and Scandinavia.

It will also be rolled out by Tourism NI in Northern Ireland and the Republic of Ireland.

Over the coming weeks – as each episode of the final season airs – six beautifully crafted, freestanding stained-glass windows will be installed across Belfast.

Each window will highlight a key House from the show, with a series of panels depicting the most exciting and talked-about moments from the entire saga.

The first window, unveiled today, is all about the House Stark.

Each window will be large enough for fans to pose in front of, for photos and selfies, so they can recreate their own Game of Thrones® photo opp.

They can then share the photographs on social media and encourage their friends and fellow fans to come and visit Belfast and Northern Ireland and experience it for themselves!

The stained glass panes have been designed by hand illustrators and are being stained by an artist in Bangor.

By the end of series eight, the stained glass windows will form a new Game of Thrones® trail, leading fans across the city to the final window at the Titanic Studios, where much of the show has been produced.

Niall Gibbons, CEO of Tourism Ireland, said: “We are delighted to continue our partnership with HBO once again in 2019, to highlight Northern Ireland – through the exciting events of Game of Thrones® – on the global stage.

“Our campaign is a fun and innovative way to bring the destination to the attention of Game of Thrones® fans around the world.

“We’re reminding people everywhere that Northern Ireland is Game of Thrones Territory and encouraging them to come and explore it for themselves.”

“The new stained glass installations will give visitors yet another way to explore the Game of Thrones® story in Northern Ireland and to delve deeper into Northern Ireland’s rich heritage.”

For fans of the show who are not yet able to come and experience the new Game of Thrones® trail in real life, there are other ways for them to sample the experience.

People visiting Tourism Ireland’s website, Ireland.com, will be able to upload a photo of themselves – to digitally place themselves in the online version of each stained glass window – and then share that photo with friends and fellow fans on their social channels.

The campaign will involve Tourism Ireland sharing details of the new installations each week, releasing a mixture of short films, images and cinemagraphs (“living” photographs) to fans around the world – via Facebook, Instagram and YouTube.

Tourism Ireland will also invite top international influencers to visit Northern Ireland and see the stained glass installations; those influencers will be sharing lots of great content – inspiring their fans and followers to come and check out the windows, and Northern Ireland, for themselves.

One window down, five more to go!