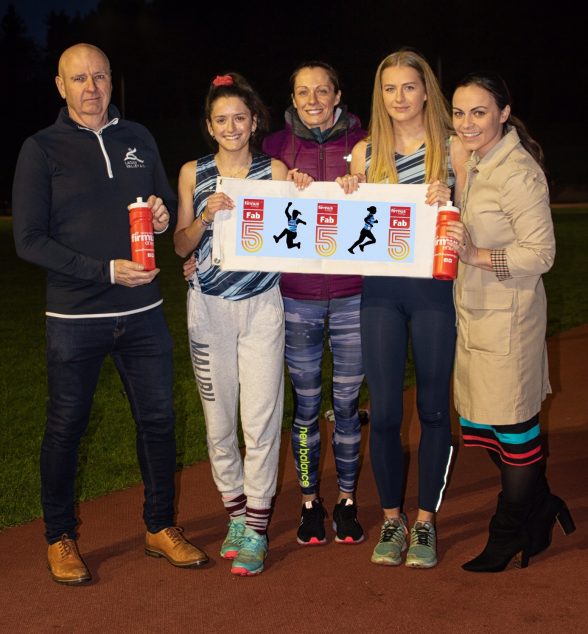 The series, which includes a wide range of track and field events is entering its 29th competitive year.

Joining the club at the launch of the 2019 series was Commonwealth Games athlete Kelly Neely.

Kelly competed in the series’ first ever meet, nearly 29 years ago and is currently Ireland’s leading Masters Middle Distance athlete having beaten several records during the winter.

Although a highly competitive series, which has seen a number of Northern Ireland’s future international athletes take part, athletes aged between 8 – 80 are invited to come along and try their hand at a range of disciplines.

“As key event sponsor, I am thrilled to be continuing our support for the Fab 5 series, allowing us to play a small part in the future development of our athletes. Over the years, the series has continued to soar in popularity and is a testament to the hard work of Lagan Valley Athletics Club.”

In 2018, the series welcomed over 1,000 young athletes from across Northern Ireland who took part in a range of track and field events, including the 100-metre sprint, long jump, javelin and shot putt.

“firmus energy has been a great series sponsor so it is fantastic to have secured support for the 2019 firmus energy Fab 5 Series. This is the 29th year of the competition and firmus energy’s 6th year as the sponsor. The support we get form firmus energy is vital to sustain the series and nurture both the health and wellbeing of our young people and identify talented Northern Ireland athletes of the future. We look forward to seeing you all there for another year of brilliant performances.”

Online registration for the first event in the 2019 firmus energy Fab 5 Series, which will take place on Thursday 11th April, is now open.

For more information and to register for the event, visit the firmus energy Fab 5 Facebook page or https://athleticsni.org/Fixtures and click the ‘firmus series’ tab, where the £3 entry fee to each event can also be paid.