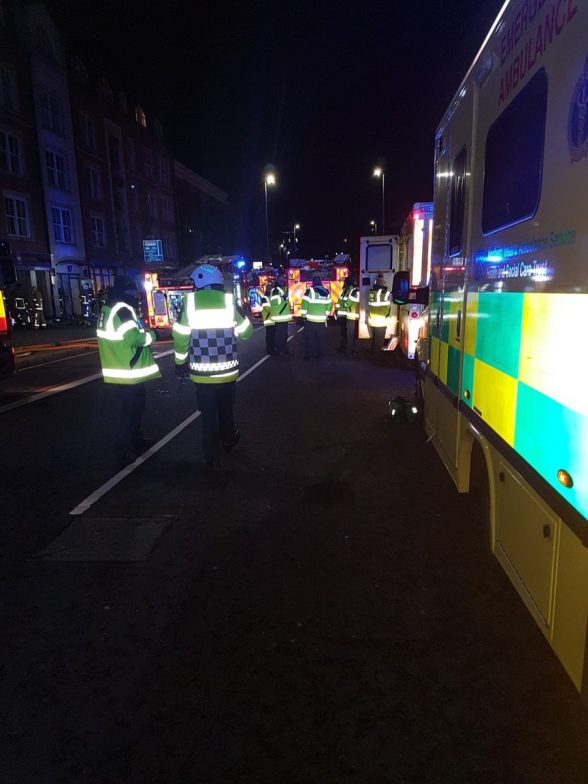 TWO people were taken to hospital and 80 people evacuated from their homes overnight following a fire at a Belfast City Centre social housing apartment complex.

Fifty-five firefighters using eight fire appliances tackled the blaze on the first floor of the building on Great Victoria Street.

Firefighters were called to the scene shortly after 2 am this morning, Wednesday, April 3.

Two people have been treated for smoke inhalation.

The cause of the fire is under investigation.

The building is managed by Choice Housing Association.

Firefighters using breathing apparatus searched six floors of the building during the incident.

The NI Ambulance Service said about 24 people were displaced by the fire and moved to a nearby community centre.

The fire service’s Alan O’Neill said: “When crews arrived they found quite an extensive fire on the first floor that had spread and travelled with quite a bit of smoke up through the building.

“So it was quite an extensive operation.”

He said that some people remained out of their homes.

“Where the fire originated, that apartment was extensively damaged and there’ll be some other work that needs to be carried out for the rest of the building before the people can move back in again,” he said.

“At this stage we’re treating it as accidental, but we will carry out further investigation later on today.”

In a statement, Choice said it was working with the fire service to establish what caused the fire.

“Choice staff are currently assisting all of the residents and we can confirm that the majority have now been allowed back into their homes.

“We are working hard to get the remaining tenants back into their home or alternative accommodation as quickly as possible,” the statement said.

“We would like to thank the NIFRS, Ambulance Service and the PSNI for their quick response and to the concierge on-site who assisted emergency services with evacuation procedures.”