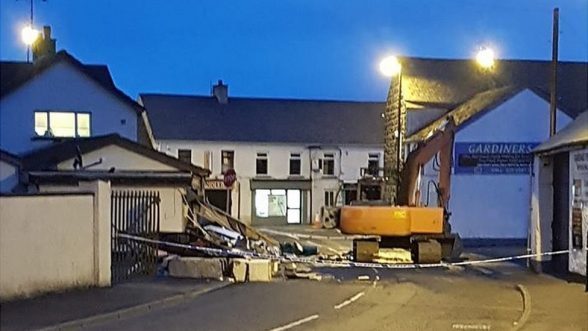 DETECTIVES are appealing for information following the theft of an ATM machine in Ahoghill during the early hours of this morning, Monday, April 1.

Detective Inspector Richard Thornton said: “We received a report around 3:25 am that a digger was on fire outside a shop on Brook Street in the village, and that an ATM had been ripped from the side of the building causing considerable damage.

“We believe the digger was stolen from a site nearby.

“I want to appeal to anyone who was in the area around the time of the incident and saw what happened, including anyone who saw a silver-coloured ‘people carrier’ type vehicle to call us.

“I also want to appeal to anyone who saw any suspicious activity in the general Ahoghill area,  including in the days prior to the theft, to call detectives on the non emergency number 101, quoting reference number 144 of 01/04/19.”

Detective Inspector Thornton urged businesses to regularly review their crime prevention measures to minimise their risk of becoming a victim of crime.

He added: “I encourage those either using or storing heavy plant machinery such as diggers or telehandlers on sites, or facilities near commercial premises, to ensure that these machines are kept locked, secured and immobilised to prevent theft.

“More generally, I would also encourage people who live close to businesses like filling stations and local shops to contact police immediately if they see any unusual activity or people in the area.

“For example, if you hear machinery late at night or in the early hours please let us know.

“Report any power outages close to commercial premises during the hours of darkness via 101.

“Also, if you see people or vehicles appearing to pay particular attention to certain premises, call police on 101. In an emergency or if you suspect a crime is in progress, dial 999.”