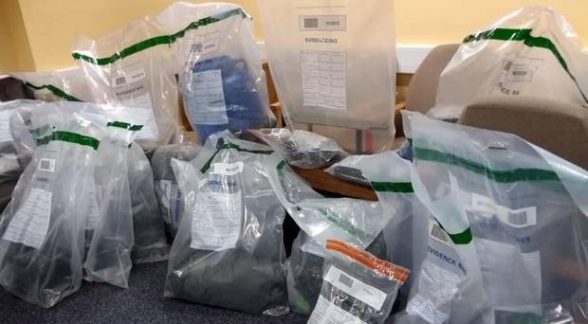 DETECTIVES have arrested two people and seized around £1 million in Class A drugs during a series of searches.

Officers from the PSNI’s Organised Crime Branch searched an area of Woodhouse Road, Coalisland and four other premises in the Mid Ulster area on Friday.

Along with the drugs they also seized drug related paraphernalia for cutting, weighing and bagging the drugs.

Two men aged 24 and 27 arrested over the haul have been charged with possession of criminal property and drugs offences.

They are due to appear at Omagh Magistrates’ Courr this morning, Saturday, March 30, for a first remand hearing.

The operation follows a number of other linked searches in the Mid Ulster area over the past six months where police seized a further £565,000 of Class A Controlled drugs.

Detective Inspector Keith Gawley of the OCB said: “These arrests and seizures are further evidence of our ongoing commitment to removing and disrupting the illegal supply of drugs in Northern Ireland.

“We know that drugs can ruin lives and line the pockets of organised criminals, and we are determined to disrupt these criminal gangs.

“I would appeal to anyone who has any information to call us on the non-emergency number 101, quoting reference number 759 of 16/02/19.