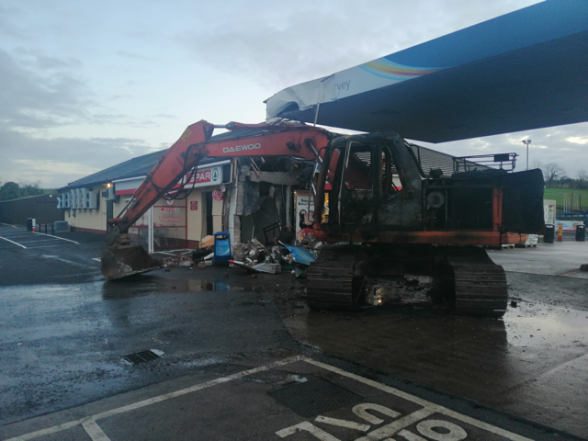 DETECTIVES are investigating after an ATM machine was stolen during the early hours of today, Sunday, March 24.

Detective Sergeant Brian Reid said: “Thieves used a digger to remove the ‘built in’ cash machine from a filling station on the Dromore Road in Irvinestown at around 4:05am causing extensive damage to the building.

“We believe the culprits used a trailer to remove the ATM from the scene.

“We also believe the digger was stolen from ground under development nearby.

“We are investigating whether this ATM theft is linked to any other recent thefts and I want to make a number of appeals today.

“Were you in the Dromore Road, Irvinestown area between 3:30am and 4:10am?

“Did you see what happened? Did you notice any vehicles being driven in a suspicious manner in the Irvinestown?

“If you have information which you think could help our investigation, please pick up the phone and call detectives in Omagh CID on 101, quoting reference 306 of 24/03/19.”