THE owner of the hotel where three teenagers tragically died at the weekend waiting to get into a disco has been released on police bail.

Michael McElhatton (52) was arrested on Tuesday on suspicion of manslaughter over the deaths on St Patrick’s night, March 17.

Mr McElhatton owns the Greenvale Hotel in Cookstown where Lauren Bullock, Morgan Barnard and Connor Curried died after being crushed to death on Sunday night, remains in custody on suspicion of causing their manslaughter.

He has now released on police bail pending further inquiries by detectives from the PSNI’s Major Investigation Team.

As part of his bail conditions he will have to return at a future date for further questioning.

On Wednesday night, Mr McElhatton released as a statement to accuse the PSNI of trying to “blacken my name” after he was re-arrested yesterday on suspicion of possessing Class A drugs with intent to supply.

The PSNI released a statement on Wednesday to say a 52-year-old man was arrested under the 1971 Misuse of Drugs Act after a search of a house in Moneymore and suspected drugs were seized.

On Wednesday evening, the PSNI made a hasty-about-turn and issued a statement to say he had been “de-arrested” for alleged drug dealing after a substance seized was tested by fast-track and found not be drugs.

In his statement, Mr McElhatton said: “While I wish to respect the ongoing investigation into the tragic deaths of three young people at the Greenvale Hotel on St Patrick’s night, I have no choice but to make it clear that I have absolutely nothing to do with drugs.

“I can assure people that whatever suspicions the police have raised about me in relation to anything to do with drugs is totally without any basis.

“I am shocked and horrified that the powdery substance taken by police from the laundry in my house could be drugs.

“Despite there being no basis to these suspicions, they have blackened my name and caused so much upset for so many people, especially those who are grieving and distressed over the events at the Greenvale Hotel.” 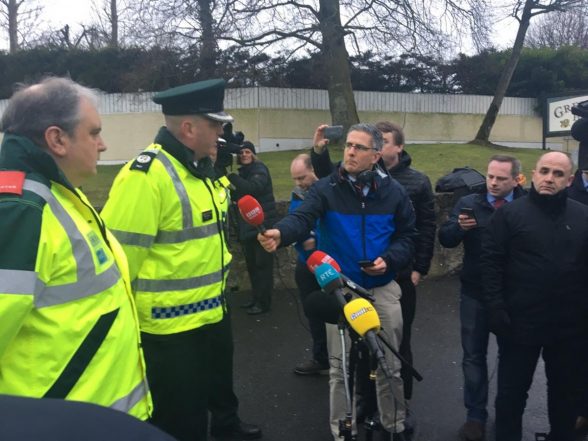 In response, the PSNI’s Assistant Chief Constable Mark Hamilton said: “Further to our statement on the arrest on Wednesday of a male in connection with a Class A drug we would like to add the following clarification.

“As a consequence of the arrest of a person on suspicion of manslaughter a search was carried out at the home of the suspect.

“The search discovered a medium size clear polythene bag containing an amount of a white powdery substance and pieces of tin foil.

“This discovery led to the suspicion that the substance was a Class A drug.

“In line with normal procedure the suspect was arrested on suspicion of possession of a Class A drug with intent to supply.

“This arrest was communicated to the media in line with procedure.

“Given the gravity of the investigation the examination of the bag was carried out urgently.

“Once opened by the Forensic Science Agency for Northern Ireland the substance inside the bag was ascertained to be an innocent substance.

“The suspect was then de-arrested in respect of the drugs offence and a communication made to the media.

“The PSNI would like to make it clear that there is no suspicion of any crime relating to misuse of drugs on behalf of the person who still remains in custody.

“The actions taken were in good faith and in line with procedure.

“We will continue to carry out a rigorous investigation into the circumstances surrounding the deaths of these three young people and we are deeply grateful for the huge assistance we are receiving from the community and we hope that people will continue to come forward and assist us with this enquiry.”

The three victims of the hotel tragedy will be laid to rest in Co Tyrone tomorrow, Friday, March 22.