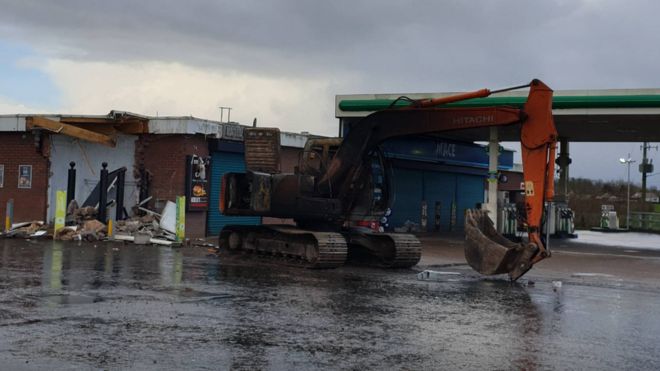 DETECTIVES are hunting a gang who used a stolen digger to steal an ATM machine from built into a wall at a petrol station early this morning, Sunday, March 10.

Detective Inspector Trevor Stevenson said: “Thieves used a digger to remove the ‘built in’ cash machine from a filling station on the Ballygawley Road in Dungannon at around 4:15 am causing substantial damage to the building.

“We believe the digger was stolen from a business a short distance away, which caused damage.

“I am appealing to anyone who was in the area between 4am and 4:15am and saw what happened, or who has information which could assist our investigation to call us.

“In particular, I am appealing to anyone who saw a jeep-type vehicle towing a trailer in the Gortlenaghan Road/Ballygawley Road areas around these times to get in touch with detectives in Omagh CID by calling 101, quoting reference 340 of 10/03/19.”