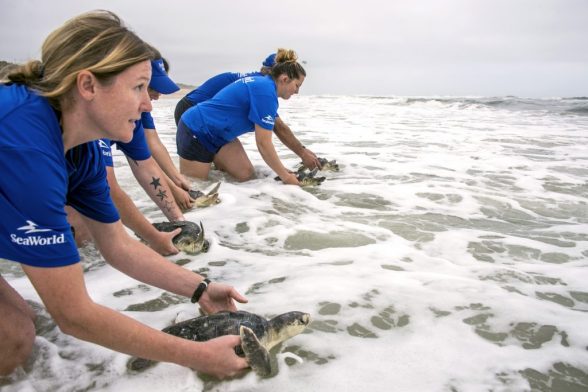 Last December, 15 of the sea turtles were rescued from frigid waters off the coast of New England by the Massachusetts Audubon Society, suffering from cold stunning.

They were initially stabilized at the New England Aquarium before being flown to SeaWorld Orlando for additional treatment.

Upon arrival in Orlando, SeaWorld’s animal care team conducted full examinations to determine the best treatment for each turtle.

Many of the animals were suffering from pneumonia; some were also treated for corneal ulcers, malnutrition and other effects of cold stunning.

After three months of individualised care, consisting of antibiotics, fluids and special diets, the turtles were cleared for return to the ocean.

The 16thturtle, also a Kemps ridley, was rescued earlier this winter from the Atlantic Coast. After months of treatment including a daily nebulisertreatment to treat pneumonia, the turtle was able to be part of the ocean return.

Kemp’s ridleys are the most endangered species of sea turtle. Human interference, nest disruption and habitat loss are just some of the reasons for the population decline.

In collaboration with government agencies and partner marine life facilities, more than 2,000 sea turtles have been rescued by the SeaWorld Rescue team since 1980.

For more than 50 years, SeaWorld Parks & Entertainment has helped animals in need – ill, injured, orphaned or abandoned, with the goal of returning them to the wild.

More than 33,000 animals have been rescued by the expert animal rescue team, which is on call 24 hours a day, 7 days a week.