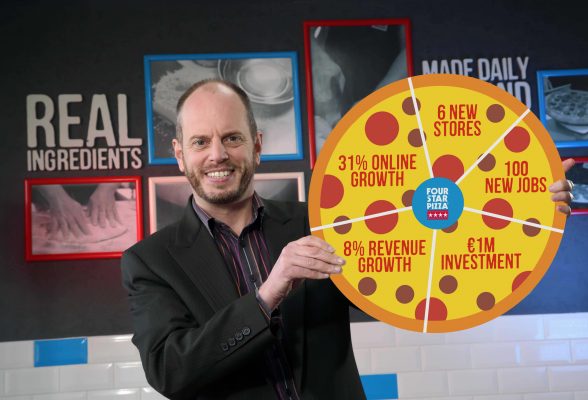 FOUR STAR PIZZA (FSP) has announced details of a record year with plans for further growth and job creation in 2019.

The wholly Irish-owned pizza chain operates 55 stores across the island of Ireland, including 14 in Northern Ireland, and experienced revenue growth of 8% during 2018, driven largely by a mouth-watering 31% rise in online sales.

With investment of over £1 million in the brand, the year also saw more than 100 new jobs created with the opening of six new stores.

The first Four Star Pizza store in Northern Ireland was opened on Belfast’s Beersbridge Road in 1999 and other locations now include Bangor, Carrickfergus, Newry, Drumahoe, Derry, Armagh, Newtownabbey, Coleraine and, most recently, Lisburn which opened its doors in December last year.

Four Star Pizza Director Brian Clarke said that the company plans to expand further this year, with a possible move into the GB market also on the menu.

“We’re delighted to announce a record year for Four Star Pizza across the island of Ireland,” said Mr Clarke, “which has seen us grow our franchise network, our revenues and our online business.

“We are particularly pleased with the growth in our online business, following the launch of our Four Star Pizza loyalty programme and development of our online ordering system to make it easier than ever for customers to place an order with us.

“This has made a significant impact with online revenue growth of more than 31%.

“This year we plan to grow our store network further in both Northern Ireland and the Republic and our target is to have a total of 65 outlets on the island by the end of 2019, creating up to an additional 200 new jobs.

“Whilst we continue to grow in Ireland, we are aware that there is a capacity ceiling here with every franchise having its own dedicated delivery territory as part of its contract.

“This protects our franchisees by ensuring that we don’t open another Four Star Pizza store just down the road from them.

“With this in mind, we have our eyes on the GB market and are actively looking at plans to expand our operations across the Irish Sea.

“In the meantime, however, we are focused on expanding the brand outside its core markets of Belfast, Dublin and Cork – which have pretty much reached saturation point,”said Brian.

The first Four Star Pizza store opened in Crumlin, Dublin, in 1986.  Now the company employs more than 1,000 people across the island of Ireland.