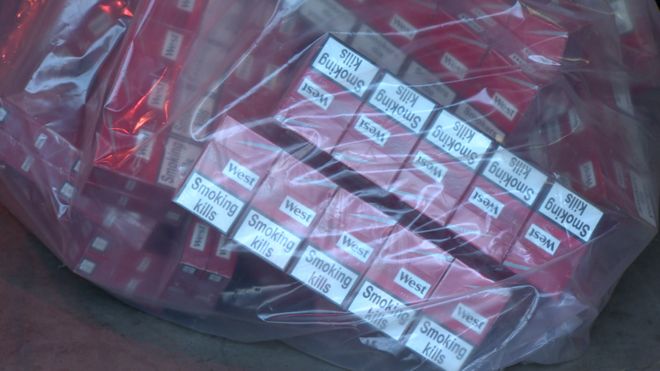 The haul of cigarettes seized by the Paramilitary Crime Task Force

The PSNI’s Paramilitary Crime Task Force seized the cigarettes and other goods, including 695.93 kilograms of hand-rolling tobacco, designer clothing, perfume and fireworks.

Searches on Friday centred on premises around Banbridge and Carryduff in Co Down and Ballyclare, Co Antrim.

They said the cigarettes were a mixture of counterfeit and real products.

The haul also included football shirts and material likely to have been used in a commemoration of the historical UVF,

A 56-year-old man, from the Banbridge area, was arrested and interviewed and has been released pending further investigation.

While seized in a one-day operation against loyalist paramilitaries, police said the goods were intended for distribution across loyalist and republican groupings.

Detective Superintendent Bobby Singleton of the PCFT said: “Police are committed to working alongside our partner agencies to combat the illicit trade of illegal tobacco and put those who seek to profit from criminality before the courts.

“Retailers who stock and sell illicit cigarettes to the public should think carefully about the potential implications upon conviction.

“They and customers who knowingly purchase illicit cigarettes should also be aware that they may be indirectly funding terrorism and criminality which brings misery and harm to local communities, all for their own selfish gains.

“I would like to thank our partners in HMRC for their assistance with this operation.

“I would appeal for anyone with information regarding criminality by paramilitary organisations to contact police on 101.

“Working together in partnership with other enforcement colleagues we can target the criminal gangs stealing from the taxpayer, robbing public services and undermining legitimate, honest traders.”