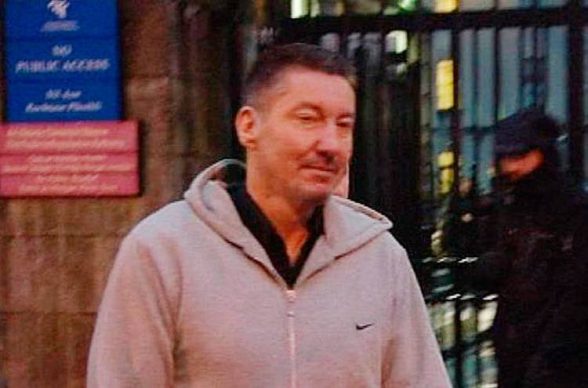 FORMER INLA terrorist Frankie ‘Studs’ Lanigan is back behind bars in a jail in Northern Ireland this evening.

The 54 year old is suspected of the murder of John Knocker and had been fighting extradition from the Republic for  the past six years.

Formerly from west Belfast but who had been living Dublin working as a barber at a gym under the assumed name of Ciaran McCrory, ‘Studs’ Lanigan faced at Dungannon Magistrates Court today following his extradition from the Republic of Ireland yesterday afternoon.

He was was arrested on foot of a bench warrant following a ruling by the High Court in Dublin on 4th September 2015 to extradite him to Northern Ireland for trial on charges in connection with the murder of John Knocker.

Mr Knocker was blasted to death in the car park of the Glengannon Hotel in Dungannon on 31 May 1998.

Lanigan was extradited after a number of appeals were heard in relation to the extradition.

He appeared before Dungannon Magistrates Court today and was remanded in custody until Wednesday 20th February 2019.

Detective Chief Inspector Talbot from PSNI’s Terrorism Investigation Unit said: “Today’s success is as a result of close partnership working with justice partners including An Garda Siochana and the PPS.

“We are committed to bringing the person responsible for John’s murder to justice.”