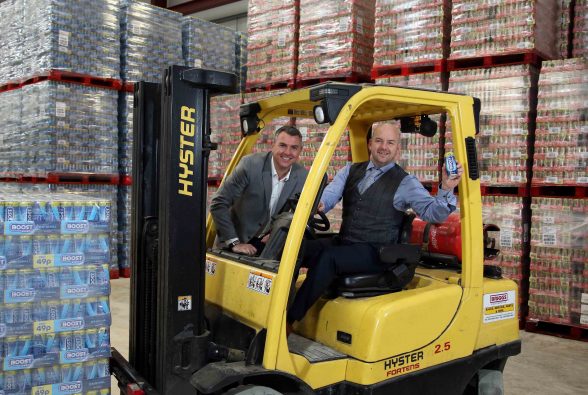 LEADING drinks company Boost has announced details of a record year in Northern Ireland with unit sales of a staggering 32.9 MILLION during 2018, an increase of almost two million units year on year.

Boost is the best-selling soft drink in Northern Ireland’s convenience sector, occupying the top three positions in the independent soft drink sales charts*, and sales show no sign of slowing down with both volumes and revenue increasing by more than 6% across all its variations.

Driving the company’s best ever year here has been the incredible growth of Boost Energy Red Berry, a flavour which at present is exclusively available in Northern Ireland.

Sales of Red Berry cans grew by a massive 57 per cent last year and such has been its meteoric rise in popularity that it’s now the company’s second best-selling SKU (stock keeping unit) behind Boost Energy Original and the company is planning to introduce the flavour into the GB market this year.

“Last year we celebrated our 15th birthday in the Northern Ireland market in fine style with lots of activity through the year so it’s only fitting that 2018 should also turn out to be our best ever year here,” said Boost Energy founder and Managing Director Simon Gray.

“I must say I’m running out of words to describe the amazing success we’ve enjoyed here since we first launched in 2003 but we are thrilled at how the people of Northern Ireland, and the independent retail trade, have taken Boost to their hearts.

“We could never have predicted though that we would be shifting this number of units in one year and that we would have the top three selling SKUs in the province.

“Northern Ireland is such an important market for us as we only sell to local independent retailers, not the big supermarket chains, and our ‘We Love Local’ ethos is all about supporting and championing these retailers who have helped make Boost the success it is today.  Looking at our performance during 2018, this strategy has definitely been the right one,” added Mr Gray.

“I would like to take this opportunity to offer my sincere thanks to everyone who has supported us thus far and we look forward to working with all of our wholesale and retail partners to grow the brand further in 2019.

“We have lots planned, including a dedicated NI charity partnership, new range extensions and exciting trade and consumer promotions, so watch this space!”concluded Simon.

2018 got off to a good start for Boost when the company signed an exclusive five year distribution deal with County Antrim-based company Hardy Sales and Marketing Ltd (HSMNI) which provides warehousing, distribution, van sales and key account management across all the major symbol, cash & carry and delivered wholesalers within the NI convenience and food service sector.

“We’ve been working with Boost since day one,” said HSMNI Managing Director Gareth Hardy, “so to see the brand grow every year and enjoy the success that it has is nothing short of phenomenal.

“It really is great news – not just for us but for wholesalers, retailers and consumers who all love the brand.”

Boost is available in various pack formats across seven core Energy flavours, as well as limited editions and Sports and Protein drinks.