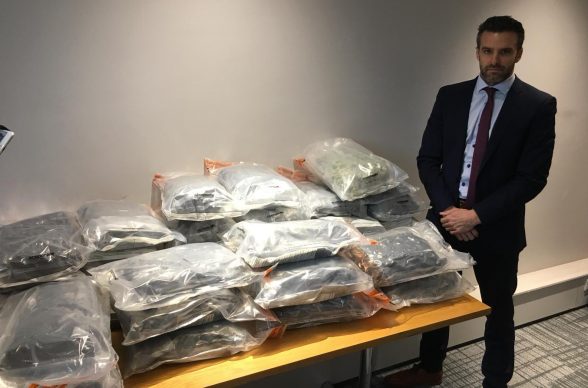 Four men aged 38, 29, 29 and 19 were arrested on suspicion of a number of offences in relation to the supply of these drugs.

They have been taken to Musgrave Serious Crime suite for questioning and remain in custody at this time.

Speaking about the operation, Detective Superintendent Bobby Singleton said: “Yesterday detectives from PSNI’s Organised Crime Unit, assisted by their colleagues across PSNI, searched two properties in the Shore Road area of North Belfast and the Springfield Road area of West Belfast as part of a proactive operation into the supply of illegal drugs.

“Two vehicles were also stopped on the M2 heading North Bound, near the Moneynick junction.

“Two men were arrested in the property on the Shore Road area on suspicion of the importation and supply of these drugs.

“A further two men were arrested in a vehicle on the M2 on suspicion of supply of these drugs and a number of immigration offences.

“The net result of these interventions was the recovery of Herbal cannabis with an estimated street value of just under £1 million.

“This is another significant haul of drugs, which is linked to our previous successes against a South East Asian Organised Crime Gang operating in Northern Ireland.

“We believe this organised crime gang is Triad linked.

“Whilst there will continue to be debate within society on the legalisation of cannabis it remains a controlled drug and is illegal to possess. Organised crime gangs like this group make huge amounts of money from its illegal trade. Some people think that buying and using cannabis is harmless that’s simply not the case. Use of cannabis itself can damage your physical and mental health. Cannabis remains the most used drug by persons in treatment in Northern Ireland for drug addiction. The money people spend on it promotes and encourages the growth of these gangs who not only use violence and intimidation to maintain their control in our communities but are also involved in other organised crime like human trafficiking .