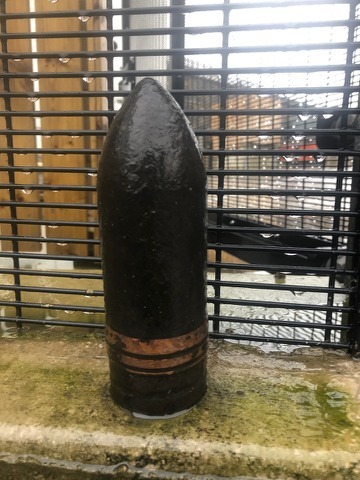 THIS is the WWI shell unearthed during construction work at a PSNI station.

Police say the security alert in the vicinity of Enniskillen PSNI station this morning (Monday 7th January) has now ended.

Chief Inspector Graham Dodds said: “During building work in the vicinity of the station earlier today what was believed to be a historic piece of munition, possibly from WWI or WWII, was discovered.

“A security operation was put in place, with nearby flats and a local park evacuated, and ATO were tasked.

“We can confirm what had been unearthed was part of old munition, that posed no danger to the public.

“The scene has now been cleared and local residents who were evacuated have been allowed home.

“A  number of premises which also had to close, have re-opened. The cordon on Lough Erne has also been lifted.

“We want to thank everyone who was affected by the operation for their patience as we worked to make the scene safe.”