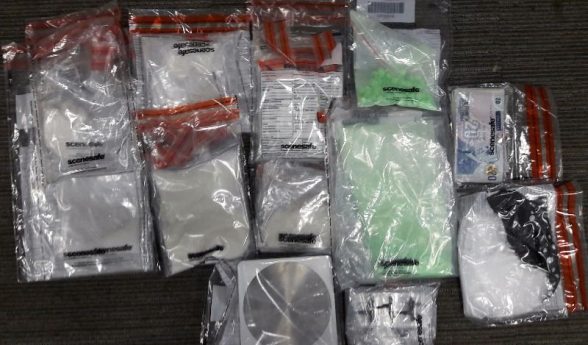 The large haul of drugs seized by police in Lisburn

COPS are jubilant after the arrest of a disqualified driver resulted in the seizure of substantial amount of drugs.

Police in Lisburn say officers stopped a disqualified driver on New Year’s Eve, which in turn led to the discovery of a massive haul of drugs.

The discovery took place on the same night as police in Lisburn arrested two people after a gun and suspected Class A drugs were found during three searches in the area.

In a post on its Facebook page, PSNI Lisburn said the disqualified driver got into his vehicle, which was uninsured, directly in front of a police officer.

The resulting arrest led not only to the driver’s car being seized, but the search of a property where police discovered cannabis plants, a cannabis grow tent, and a large amount of suspected class A drugs, among other items.

“It started as he took his disqualified driving self, jumped into an uninsured car and started your drive, but unfortunately for him this just happened to be in front of one of the guys in the team,” PSNI Lisburn wrote.

“Why did he do this? Who knows! Just obviously doesn’t care about being disqualified, but hey, sometimes you’re in the right place at the right time and just got to take what’s in front of you.

“Now that resulted in him losing the car for a start, and not a bad motor either, and then lead to a search of a property which started with some cannabis plants being discovered in a now very dismantled grow tent…

“[The search] continued on with a large quantity of various suspected class A drugs also seized.

“We’re talking possibly tens of thousands of pounds worth, as well as a few other bits and bobs as you can see from the picture.

“It’s all now safe and sound in our property store.”