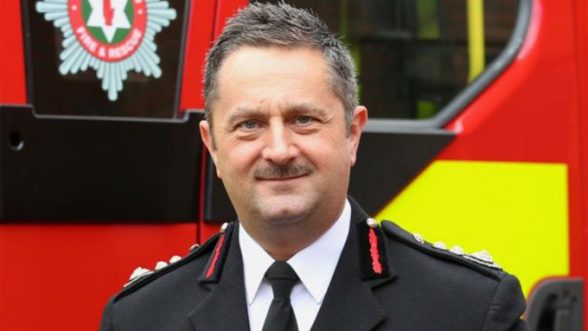 NORTHERN Ireland’s most senior fire officer Gary Thompson has been suspended from duty after a woman alleged to police he sexually assaulted her when she was a teenager.

At first it was believed Thompson’s suspension on Monday, December 10, was over a recent BBC Spotlight investigation into his association with a number of men, including a fellow fire fighter, involved in offering clients high returns for investing their cash in property.

Company owner David Fleck went to jail for fraud and the firm collapsed leaving clients out of pocket to the tune of hundreds of thousands of pounds.

But Fire and Rescue Service sources have confirmed to Belfast Daily that Thompson’s “precautionary suspension’’  was not sparked by the Spotlight probe.

They confirmed his relief from duties as Chief Fire and Rescue Officer on full pay followed historical allegations of indecent assault on a child.

We understand the complainant went to the PSNI’s Public Protection Branch recently and alleged that when she was aged 15, Thompson indecently assaulted her and committed an act of gross indecency on or towards  her while both were members of a fundamentalist church.

Her complaints are alleged to have happened over 25 years ago.

As a result, the PSNI arrested Thompson on Saturday,  December 8,  at his Newtownabbey home in Co Antrim for questioning over the historical allegations.

He has strenuously denied the allegations.

In a statement to Belfast Daily, the PSNI confirmed: “Detectives from the PSNI’s Public Protection Branch conducted a search and arrested a 50 year old man in the Newtownabbey area on Saturday, December 8 on suspicion of indecent assault and gross indecency with or towards a child.

“He has since been released on bail pending further enquiries.’’

NI Fire and Rescue Service were subsequently informed about the allegations against Thompson and his arrest for questioning.

Following internal discussions, the board of NIFRS decided father-of-two Thompson would have to step aside from his post as chief fire officer as a precautionary measure until the outcome of the investigation.

An independent panel has now been set up to investigate the matter.

Said the source: “The Fire Service has been rocked by this allegation against Gary. Nobody can believe it.

“From what we have heard, Gary has taken this really hard.

“All we know is that he has strenuously denied the allegations and will be doing everything possible to clear his good name both in and out of the Fire Service.’’

The source added that the allegation predates Thompson joining the Fire and Rescue Service in 1994 aged around 26.

“That is why the Fire Brigade Union has not been asked to represent him,’’ said the source.

“The allegation does not relate to him being employed with the Fire and Rescue Service.

’’If he had been a serving fireman at the time, he would have the full services of FBU representation from here on it.’’

The Fire and Rescue Service refused to answer a series questions about the allegations posed by Belfast Daily about Thompson’s “precautionary suspension’’.

We asked NIFRS if Thompson’s suspension was in connection with an allegation of historical indecent assault on a woman who was aged 15 at the time.

A  NIFRS spokeswoman said: “We have no further comment to make.’’

The spokeswoman referred us to a statement it released on Monday, December 10.

“Precautionary suspension is a neutral action in line with NIFRS policies and procedures.

“NIFRS is not in a position to make any further comment at this time.”

Belfast Daily called at his semi-detached Newtownabbey and asked if he was at home.

His wife Lorraine Thompson said: “No, I am sorry, he is not in.’’

Asked about his suspension from the Fire and Rescue Service, Mrs Thompson would only say:  “I don’t want to comment about it.’’ 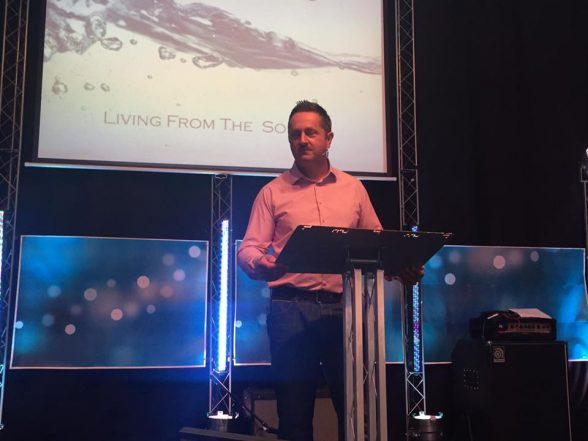 Gary Thompson preaching at the Exchange Church in east Belfast

Belfast Daily can reveal that Thompson is a director and secretary of Exchange Church Belfaslt based on the Albertbridge Road in east of the city which was set up in 2009.

It says its mission was “to share the love, grace & unmerited favour of God with the world’’.

But a video of Thompson preaching to the congregation has now been removed from the site.

We tried to contact the church for comment for the past number of days but its telephone was not taking incoming calls.

According to last month’s Spotlight investigation, Thompson had been involved with another fire fighter Ian Neely from Whitla Station in north Belfast in encouraging colleagues in the Fire and Rescue Service to invest their hard earned cash in a Holywood-based company called Franklynn Holdings.

The property investment business, run by David Fleck out of a plush address in Victoria Road, later collapsed owing some clients hundreds of thousands of pounds.

In 2015, 53-year-old Fleck was jailed for six months at Downpatrick Crown Court after he pleaded guilty to fraud and false accounting.

But Spotlight reporter Datshiane Navanayagam discovered that despite his convictions, swindler Fleck was back in business, this time with another dodgy pal, Darren Cummings.

Run out of the same leafy street in Holywood, Fleck and Cummings set up Kingswell Private Clients and took tens of thousands of pounds from clients.

Their get-rich-quick-scheme offered returns on cash investments of between 10 and 25 per cent.

Some of the clients were fire fighters introduced to the pair by another fireman Ian Neely, a former champion athlete, and a close friend of his fire chief boss Gary Thompson.

One firefighter, introduced to the scheme by Neely, invested £18,500 but later died of terminal cancer.

He was promised a £14,500 “trading gift’’ but the company refused to pay over that sum to his family.

According to documents seen by Spotlight, Thompson and Neely were involved in Franklynn Holdings from “its earliest stages’’.

In return for introducing clients to Fleck, Spotlight said Thompson and Neely were “paid a commission to do so’’.

After one woman couldn’t get her £165,000 investment back from Franklynn Holdings, she went to the PSNi who launched a fraud inquiry which resulted in Fleck pleading guilty to taking six figure sums under false pretences.

And partner-in-crime Darren Colvin Cummings, of Upper Moville Street, Newtownards, was sanctioned in June this year by the Financial Conduct Authority.

He got rapped for breaking its strict rules over his DCC Financial firm which was authorised to “conduct insurance mediation and home finance business’’.

An FCA probe found he had submitted to them false documents and lied to investigators that he was qualified to provide financial advice.

He was fined £29,300 and banned from holding a directorship in a financial firm.

“He was caught drink-driving while off duty and got banned,” confirmed the source.

“At the time he was a rising star in the Fire Brigade and his case was pleaded for him not to lose his job.

“In the end, a disciplinary hearing decided not to sack him and he was confined to a desk job until his driving ban expired.

“Gary came up through the ranks and is very popular throughout the service.’’

Thompson, who has 24 years service with NIFRS, was appointed chief fire officer on November 7, 2016, by the then Sinn Fein Health Minister Michelle O’Neill.

He was described on appointment as a “committed and dedicated firefighter” bringing a “wealth of operational and strategic leadership experience” to the role.