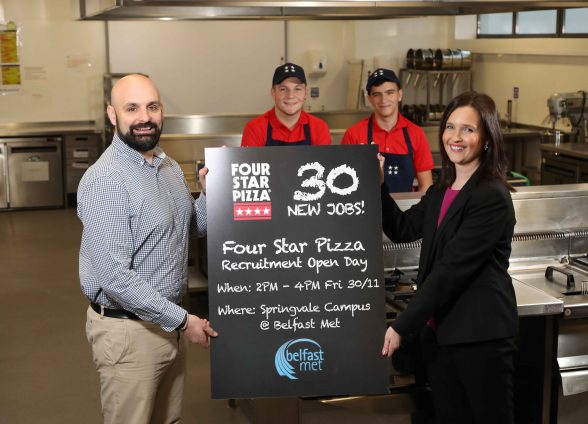 30 NEW JOBS: (l-r) Scott Higginson, Managing Director of Four Star Pizza, is joined by team members Adam McFarlane and Alex Tibuc, and Emma Morrison, Employer Engagement Executive at Belfast Mets Centre for Skills & Apprenticeships to announce a recruitment drive to hire 30 new team members for positions based across Belfast and Lisburn, alongside a new Earn as you Learn apprenticeship scheme in partnership with Belfast Met.

FOUR STAR PIZZA has today announced a recruitment drive to hire 30 new team members for positions based across Belfast and Lisburn, alongside a new ‘Earn as you Learn’ apprenticeship scheme in partnership with Belfast Met.

The pizza chain, which currently operates 13 stores in Northern Ireland and 53 across the Republic of Ireland, will be hosting a recruitment open-day at the Belfast Met Springvale Campus on Friday November 30th, where candidates can be interviewed for positions on the spot as well as receive information about the company’s new skills partnership with Belfast Met.

The newly announced scheme, which already has two new recruits, Adam McFarlane and Alex Tibuc, is designed to allow Four Star Pizza employees to gain qualifications relevant to the hospitality industry via Belfast Met and is structured so that the new students training takes place during their normal paid working day.

Employees who wish to access the scheme will be mentored by both Belfast Met trainers and experienced Four Star Pizza team managers, while any employees who require additional training in Maths, English or ICT can also access essential skills training as part of the course.

“As we continue to expand across Northern Ireland, I am thrilled to be announcing these 30 new positions across our stores. We are also proud to announce our new ‘Earn as you Learn’ apprenticeship scheme in partnership with Belfast Met which will allow our employees to access further training and gain new qualifications while they work for us.

“On Friday November 30th, we will be hosting a recruitment open day at Belfast Met’s Springvale Campus from 2:00PM to 4:00PM. We will be holding interviews on the day and offering positions on the spot for these 30 new roles in customer service, pizza making, and management across Belfast and Lisburn. If you’re interested in hearing more about what we have to offer our staff at Four Star Pizza then we look forward to seeing you there on the day!” he added.

“The Centre for Skills and Apprenticeships at Belfast Met is delighted to be working in partnership with Scott Higginson and his team at Four Star Pizza. We could see straight away that Scott and his team recognized that a successful business model requires skilled, qualified and motivated staff who can foresee a future career pathway.

“We are confident that our Four Star Pizza participants in the scheme will benefit greatly from the “Earn as you Learn” accredited skills development programme and can expect to have a promising career ahead of them,” added Emma.

The Four Star Pizza Recruitment Open-Day will be taking place from 2:00PM – 4:00PM on Friday November 30th at the Belfast Met Springvale Campus. Those interested in attending are encouraged to bring along a copy of their CV as interviews will be conducted on the day and successful candidates are expected to be offered positions on the spot.

Four Star Pizza is a wholly Irish-owned Pizza chain, established in 1988, and operates 53 stores across the island of Ireland, including 13 in Northern Ireland.

The company’s first Northern Ireland restaurant was opened in 1999 on Belfast’s Beersbridge Road and other locations include Bangor, Coleraine, Carrickfergus, Newry, Drumahoe, Derry, Armagh and Newtownabbey.