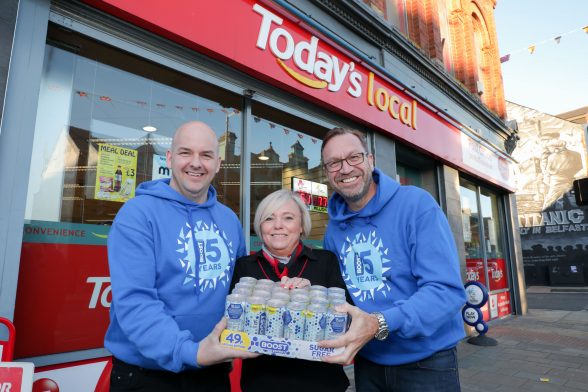 Since Boost first hit the shelves here in 2003, it has enjoyed phenomenal success in the local market which is reflected by the fact that the brand, incredibly, now occupies the top three positions in the convenience sector’s soft drink sales charts*.

To recognise the huge role that Northern Ireland’s independent retailers have played in this success, Boost founder and Managing Director Simon Gray and a team of staff hit the road for two days to pay a surprise visit to stores around the province.

The ‘We Love Local’ road trip took its name from the company’s ethos to deal only with the independent retail sector and not with the large multinational supermarket chains – and every store that received a visit was given the chance to win free stock – and a short break on the Causeway Coast – if they could answer some salient questions about the brand in Northern Ireland. 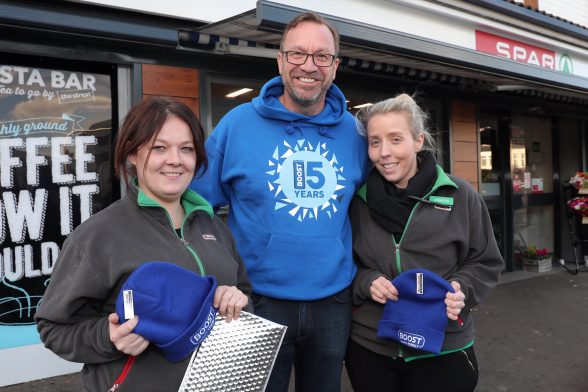 Boost Energy founder Simon Gray explained:  “The success of Boost has been nothing short of amazing since we launched here in 2003 so it was very important for us to celebrate our 15th birthday with the people that have helped us reach the remarkable position we’re in – with the three top selling SKUs in the province.

“Northern Ireland is a very important market for us and our success here shows that our strategy of selling Boost exclusively in local independent retail stores and not the big supermarket chains has been the right one.

“We are committed to supporting the local home-grown independent retailers who have helped make Boost the huge success in Northern Ireland that it is today, which is why we headed out on the road last week to meet with as many retailers as we could.

“The knowledge that NI retailers had of the brand was fantastic and we were thrilled to celebrate this milestone with them,” he added.

“We had lots of fun along the way and were delighted to have the opportunity to say thank you to store staff and give them a chance to win some free stock, as well as an opportunity to win a short break on the beautiful Causeway Coast – in recognition of our new special edition Sugar Free can design which is exclusively available in Northern Ireland until the end of the year.” concluded Simon. 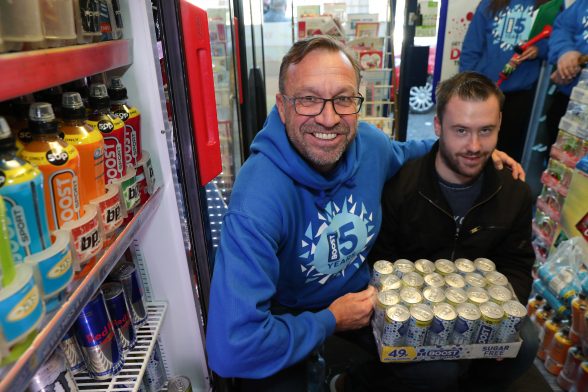 HSMNI Managing Director Gareth Hardy said:  “We’ve been working with Boost since it first arrived in Northern Ireland 15 years ago, and to see the brand occupy the top three soft drink sales positions in the convenience sector is fantastic news not just for us but for wholesalers, retailers and consumers who all love the brand.

“Our ‘We Love Local’ road trip was a brilliant opportunity to meet with our retail partners across Northern Ireland and to thank them for helping us to collectively grow the brand across the province,” he added.

The convenience sector in Northern Ireland covers more than 1,100 independent retail stores, excluding the large multinational supermarket chains, and the top selling soft drink SKU by some distance is the original Boost Energy 250ml can which retails at 49p.