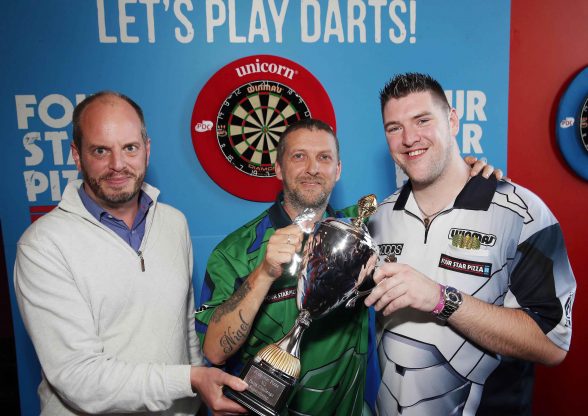 NEWTOWNABBEY man Nigel Cahoon has been crowned the first ever Four Star Pizza NI Darts Champion after battling it out against the cream of amateur darts in Northern Ireland at an event in the Titanic Hotel, Belfast, hosted by world number five Daryl ‘Superchin’ Gurney.

Cahoon, aka ‘Mr Ooosh’, lifted the inaugural Four Star Pizza trophy after a convincing 6-1 win in the final over Jonny ‘The Sniper’ Allen from East Belfast – earning himself an opportunity to test his darting skills against Derry~Londonderry man Daryl.

‘Superchin’ took a break from his busy schedule to meet and greet players from around the province at the one-day, winner-take-all tournament which was compered by legendary local sports commentator Jackie Fullerton.

Unfortunately, Daryl was in no mood to take it easy on Nigel, giving him a taste of his own medicine with a resounding 6-1 victory.

However, that did not detract from the magnificent darts thrown all day by Nigel who, as well as walking away with a very impressive piece of silverware, also won an overnight break in Dublin with tickets to watch Daryl competing in the World Grand Prix, an official signed playing shirt from Daryl and, best of all, a year’s supply of Four Star Pizza!

A triumphant Nigel said:  “I’m absolutely over the moon to lift this wonderful trophy, given the quality of the darts players here today.  It was a hard slog but I played really well and thankfully got there in the end.

“It was amazing to play a match against Daryl who unfortunately showed me just why he is one of the top darts players in the world.

“You don’t get to world number five by accident and, against me, he showed that he is true class – as a player and as a man.  He’s a legend!

“Given the form he’s in, I think I actually did well to win a leg as Daryl showed everyone the high standards we need to reach to become a professional darts player. Hopefully some of the lads playing here today will go on to do just that,” he added. 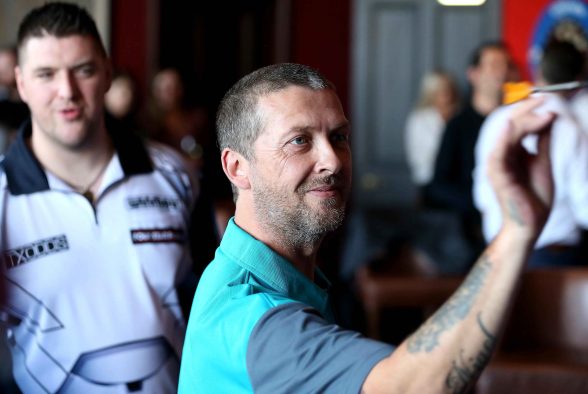 MAGIC DARTS: Nigel Cahoon from Newtownabbey, alias Mr Ooosh, in action against World number five Daryl Superchin Gurney at the inaugural Four Star Pizza NI Darts Challenge event in the Titanic Hotel, Belfast. After beating the cream of amateur darts in Northern Ireland, Nigel earned himself an opportunity to test his darting skills against Superchin himself. Unfortunately Daryl, who hails from Derry~Londonderry, was in no mood to take it easy on Nigel with a resounding 6-1 victory.

Speaking after the event, Daryl Gurney said: “We’ve had a fantastic day at the first ever Four Star Pizza NI Darts Challenge and I have to say that the quality of darts on show was brilliant throughout.

“We have a lot of excellent players here at home and I’m very proud to fly the flag for Northern Ireland on the international darts scene.

“I’d like to congratulate Nigel on winning the competition and also my sponsor Four Star Pizza on organising such a brilliant event.  Sponsors are so important in modern day sport to help bring talent through and the Four Star team have been a joy to work with this year,” concluded Daryl.

Four Star Pizza Director Brian Clarke said: “We’ve been proud to support Daryl throughout the 2018 darts season and we know that thousands of our customers in Northern Ireland cheer him on in every match – hopefully tucking into a Four Star Pizza as they watch him on the box.

“We’re delighted at the success of our first darts tournament and to give some of our best local players a great opportunity play against each other – and of course Daryl.  Congratulations to Nigel on becoming our first Four Star ‘Superchamp’.  It was well deserved and we wish him every success in the future,” added Brian.

Four Star Pizza is a wholly Irish-owned Pizza chain, established in 1988, and operates 53 stores across the island of Ireland, including 13 in Northern Ireland.

The company’s first Northern Ireland restaurant was opened in 1999 on Belfast’s Beersbridge Road and other locations include Bangor, Coleraine, Carrickfergus, Newry, Drumahoe, Derry, Armagh and Newtownabbey. 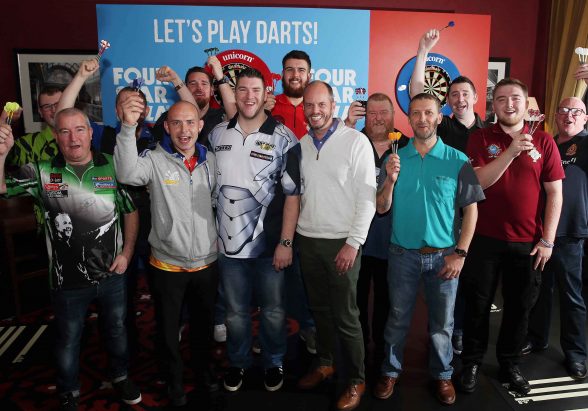