AHOY FRANCE! ONE MILLION PLUS FRENCH TO SEE NORTHERN IRELAND ON TV 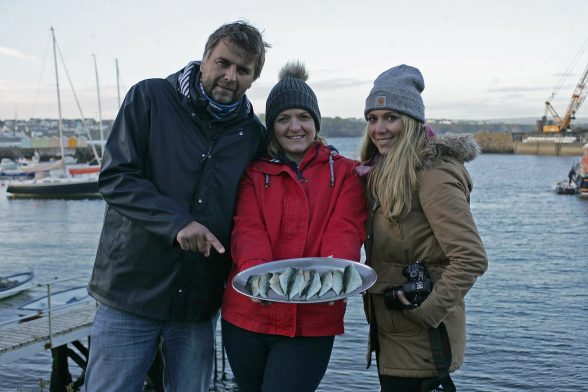 MORE than one million people across France will be seeing images of Northern Ireland and our superb food on TV early next year.

A crew from a TV programme called Pays et Marchés du Monde (meaning ‘Countries and Markets of the World’) has been filming here, as guests of Tourism Ireland and Tourism NI.

Pays et Marchés du Monde is a popular food and travel TV series which reaches over one million viewers on France 2 and TV5 Monde.

During their time here, the crew took part in a ‘Catch and Sea Experience’ in Portrush Harbour with Causeway Coast Foodie Tours; and also spent time at Lacanda Brewery in Portrush.

They filmed at Ursa Minor Bakery, the North Coast Smokehouse and Broughgammon Farm in Ballycastle.

And, they visited the Giant’s Causeway, Carrick-a-Rede Rope Bridge, St George’s Market in Belfast, Mount Stewart House and Gardens on the Ards Peninsula and the Saint Patrick Centre and Down Cathedral in Downpatrick.

“With an audience of more than one million viewers, it’s a fantastic opportunity to showcase Northern Ireland and its wonderful food scene as well, as some of the many things to see and do here for French holidaymakers.

“Television and film are recognised as strong influencers for prospective holidaymakers and Tourism Ireland regularly works with TV and production companies in France, and elsewhere around the world, to facilitate the making of travel and lifestyle programmes in Northern Ireland.”