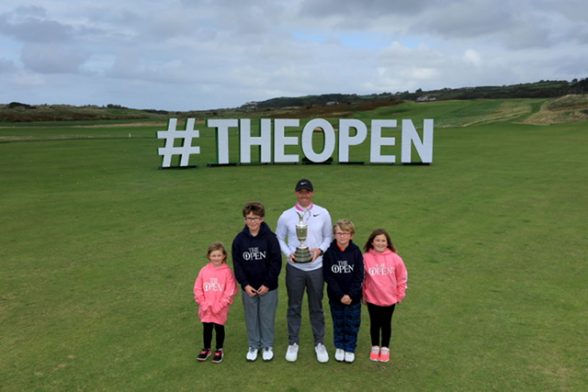 Global golfing hero Rory McIlroy landed on home soil this week as Tourism NI launched the official Epic Journey to The 148th Open at Royal Portrush. Rory was pictured alongside Portrush Primary School’s Noah and Jamie Beggs and Emily and Charlotte Beatt, with a newly revealed #TheOpen letter sculpture, designed by Tourism NI, along with golf’s most iconic trophy, the Claret Jug, to highlight the huge opportunity The Open brings to Northern Ireland as golf’s original championship makes a historic return for the first time in 68 years.

McIlroy, who won The Open at Royal Liverpool in 2014, was pictured with a newly revealed #TheOpen letter sculpture, designed by Tourism NI, along with golf’s most iconic trophy, the Claret Jug, to highlight the huge opportunity The Open brings to Northern Ireland as golf’s original championship makes a historic return for the first time in 68 years.

His appearance at Royal Portrush marked the symbolic first stop of the letter sculpture as they embark on a special tour across Northern Ireland and the Republic of Ireland throughout 2018/19.

Rory McIlroy commented: “The Open returning to Portrush is massive for Northern Ireland, everyone is so excited and is getting behind it. I never thought I would have the opportunity to play in a major championship at home and I’m really looking forward to it.

“You can really feel the buzz here already, it’s going be a fantastic year as we get ready to welcome The Open for the first time in over half a century.”

The eyes of the world will fall on Northern Ireland from Sunday 14th – Sunday 21st July 2019, with the Championship attracting more than190,000 spectators and will be broadcast to over 600m households around the world.

To celebrate the return of The Open, there are activities planned throughout Portrush and the Causeway Coastal Route with a festival programme adding to the momentous atmosphere throughout The 148th Open.

John McGrillen, Tourism NI’s Chief Executive, commented: “What better way to kick-off The Epic Journey to The 148th Open and the celebrations for Northern Ireland than to have a global golfing superstar of Rory’s calibre pictured with the #TheOpen letter sculpture and the Claret Jug at Royal Portrush”.

“We can’t wait to show the world all we have to offer. Northern Ireland’s reputation as a premier destination for international events will also be firmly established as a result of hosting The 148th Open.

“From stand-out golf courses across the country, visitor attractions, hotels, and a rich heritage to award-winning food & drink and the warmest of welcomes, Northern Ireland is perfectly positioned to host an event of this scale and significance.”

Tickets for the Practice Days at Royal Portrush are still available.

Spectators can get close and interact with some big names as the players get their first look at Royal Portrush ahead of golf’s most international championship.

With a wide-range of stunning hotels, bespoke B&Bs and self-serviced apartments to choose from across Northern Ireland, visitors are encouraged to plan their trip in advance, as accommodation is in high demand.

There is still availability on the Causeway Coast and with strong transport links across the whole of Northern Ireland, a huge array of accommodation options awaits visitors in July 2019.

Johnnie Cole-Hamilton, Executive Director – Championships at The R&A, said: “We are looking forward to a historic milestone with the return of The Open to Northern Ireland for the first time in 68 years.

“There is real excitement amongst fans to see the world’s top golfers playing at Royal Portrush and it promises to be a fantastic championship.”

Full details for Tourism NI’s official Epic Journey to The 148th Open and The R&A’s Claret Jug tour schedule for Northern Ireland and the Republic of Ireland will be available in the coming weeks on www.tourismni.com and www.randa.org