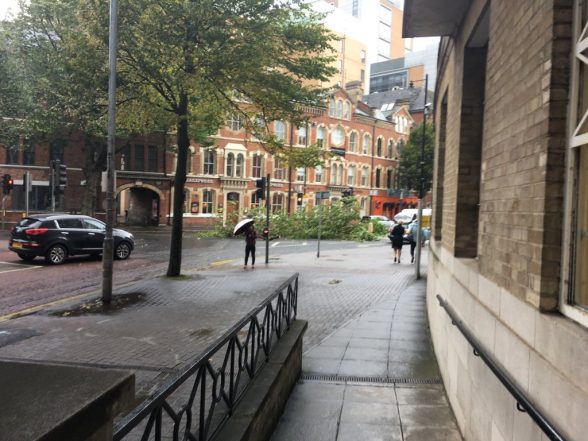 An amber weather warning has been in place from early on Wednesday and wind gusts of up to 65mph are expected inland.

Higher gusts are likely in the north west and north coast. The storm is due to reach its peak before 12:00 BST.

In the Republic of Ireland, a caravan has been blown over a cliff at Clifden, County Galway. It is understood a woman in her 50s was in it at the time.

The caravan landed on coastline, not in the sea.

Two councils in Northern Ireland have closed parks and cemeteries.

The Foyle Bridge in Derry has now been completely closed and the  local council has shut all cemeteries and parks until further notice.

There are reports of fallen trees blocking roads.

Saintfield Road is closed at the junction of the old Ballynahinch Road and the Lisburn Road between Lisburn and Temple is closed in both directions.

In Belfast the Ballygowan Road has been closed.

In Co Fermanagh the Boa Island Road is closed in Enniskillen and the Belfast Road in Lisbellaw, while in Omagh the B48 Gortin Road/Glen Park Road is closed and trees are down on the Tonnagh Road and St Julian’s Road.

There is also a fallen tree on the Roslea to Monaghan Road in County Fermanagh.

Translink has said NI Railways has implemented a blanket speed restriction on all lines until further notice.

“We have staff on standby to remove fallen trees, branches and other debris from railway lines. Meanwhile, our bus operations teams will continue to monitor road conditions and will review routes accordingly,” Translink said.

The areas worst affected are Tralee, Killarney, Thurles, Galway, Sligo, and Cork. Gusts of up to 89 mph have hit Mace Head in Galway.

Dozens of flights have also been cancelled.

Belfast City Council has closed its parks, playgrounds and playing fields for the day because of the dangers of the storm. Belfast Zoo is also closed.

Bins will be collected but the council is asking people to bring them in quickly and look out for neighbours’ bins. 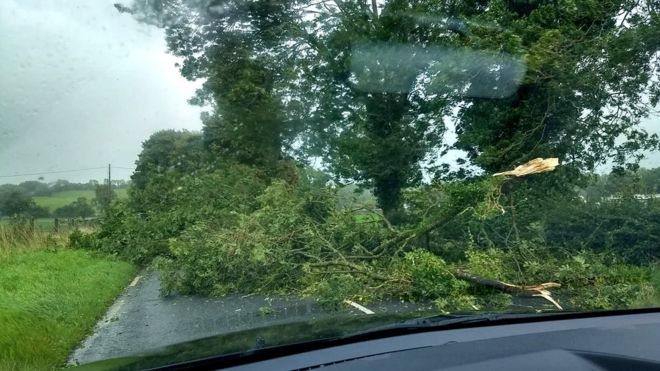 A fallen tree on the Roslea to Monaghan Road

There are warnings about flying debris, fallen trees, traffic disruption and power cuts.

All sailings between Rathlin and Ballycastle on Wednesday have been cancelled.

Two of Stenaline’s morning crossings to and from Cairnryan have also been cancelled.

The Department for Infrastructure has held “a multi-agency teleconference” to co-ordinate departments, councils and utilities in their response to the storm and is asking the public to take precautions when travelling as there may be disruption on roads.

In the Republic of Ireland, the Office of Public Works has closed some of its public sites in areas where the wind warnings will be in place.

The sites include Skellig Micheal, the Battle of the Boyne site and St Audeon’s Church.

The weather is to improve from about 6 pm on Wednesday.