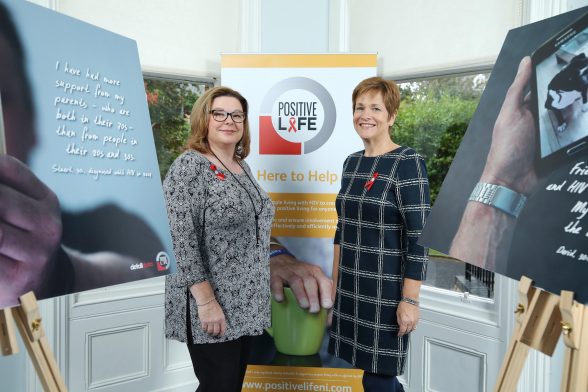 DAWN Purvis has been announced as the new chairperson of Northern Ireland’s only dedicated HIV charity, Positive Life.

The former MLA takes up the post after serving on the board of Positive Life for several years. She replaces Colum Conway who has been appointed as head of Social Work England.

Approximately 100 new cases of HIV are diagnosed every year in Northern Ireland and the numbers of new diagnoses continue to rise, unlike the rest of the UK where they are falling.

Recently Positive Life, Northern Ireland’s only dedicated HIV charity revealed that the numbers of people with HIV accessing its services has almost doubled in just one year. New statistics showed that there was over an 80% increase since 2017.

This unprecedented increase is a result of several wide-ranging campaigns to raise awareness around sexual health, stigma and support services.

In many cases, Positive Life offers the only real and meaningful contact that those living with HIV have due to the overwhelming impact of the stigma around the condition here in Northern Ireland.

Purvis takes up the role as Chair in the lead into World AIDS Day which takes place on 1 December and is one the focal points of the year for the charity.

“This shows just how vital the work carried out by our staff and volunteers is to help those affected live healthy lives and ensure they are treated with respect and dignity.

“I’m keen that the lived experience of those with HIV in Northern Ireland remains at the heart of everything we do.

“One of the biggest issues that impacts our service users is the persistence of the all too common and harmful misconceptions around HIV and the daily stigma faced by those living with it.

“We know that HIV doesn’t discriminate. We know that it can affect people regardless of their gender, religion, age or sexuality.

“We know this, but without an Assembly, without a Health Minister and a comprehensive sexual health strategy, there are no proactive measures being taken to combat the stigma that still surrounds HIV.

“I will use my term as chair to further the issue of sexual health education and empowerment and push to end the stigma around the issue which is now a manageable lifelong condition and not the death sentence it once was.”

“I am absolutely thrilled Dawn has taken up the post of chair of Positive Life.

“The organisation will benefit greatly from her skillset and experience, including her strong corporate governance knowledge.

“Dawn brings to this challenging position her caring, sympathetic personality and her exemplary commitment to helping those in Northern Ireland with HIV.”

She added: “One of the most important jobs we have is combatting the stigma around getting tested and encouraging as many people as possible to take control of their own sexual health.

“There should be no embarrassment or shame in getting a HIV test if a person feels that they are at risk and the fact that there is has a direct and devastating impact on people’s lives.”