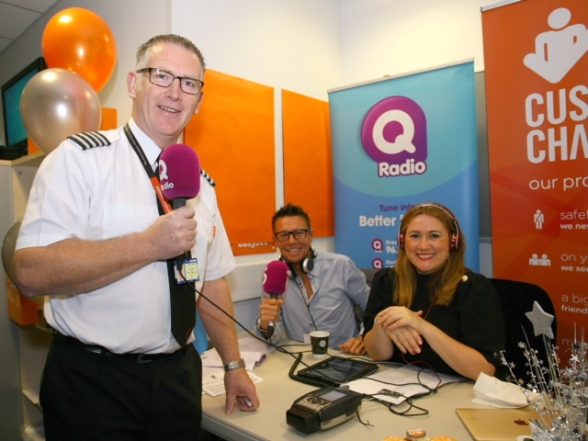 EASYJET, Europe’s leading airline and the largest airline in Northern Ireland, is celebrating 20 years of flying passengers to and from Belfast International Airport today.

The airline is celebrating with Q Radio with the Q Breakfast team Stephen and Cate, who are hosting their show live from behind the scenes at easyJet’s crew room at Belfast International Airport.

Listeners will hear from easyJet’s crew on what it’s like to fly from Belfast and can enter a competition to win easyJet flights, with two pairs of return tickets to anywhere on the Belfast network up for grabs.

In 20 years of operations, easyJet has grown to be the largest airline at Belfast International Airport and in Northern Ireland, flying 54 million passengers in that time with over 4 million flown last year.

easyJet’s very first flight from Belfast – to London Luton – took off on the evening of Friday 18 September 1998 and since then the airline has gone from strength to strength.

This year easyJet welcomed its sixth A320 family aircraft to the base and launched four new routes to the Isle of Man, Valencia, Venice and Naples, bringing the number of easyJet routes now serving Belfast to 35. easyJet now carries more passengers from Belfast to Spain and Portugal than any other airline and links Belfast with more London airports than any other airline, providing up to 200 flights a week. 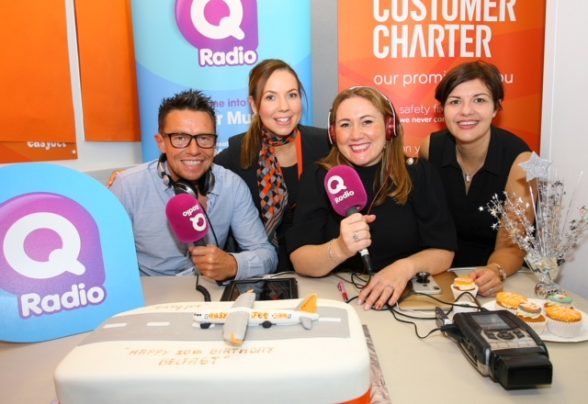 This month easyJet recorded its busiest flying day in history and carried over 330,000 passengers on its flights last Friday 14 September; over18,500 of these passengers flew to or from Belfast.

“We are delighted to be celebrating our 20th Birthday at Belfast International Airport today.

“For two decades we are proud to have been providing passengers with an ever-growing range of destinations, all with low fares and great service.

“Our ongoing growth at Belfast International Airport demonstrates easyJet’s long-term commitment to Northern Ireland and as the largest airlinewe are proud to have carried 54 million passengers in that time.

“We look forward to providing even more choice for our Belfast customers in the years ahead.”

“easyJet has revolutionised air travel in Northern Ireland over the last 20 years, providing passengers with low fares to 35 destinations across GB and Europe, direct from their local airport.

“The partnership between easyJet and the airport has been a tremendous success and we look forward to building on that success over the coming years.”