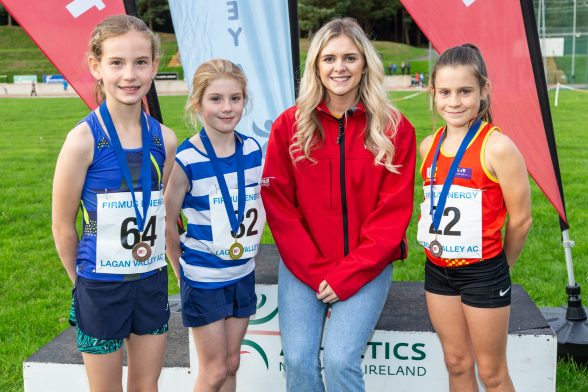 Emer McKee (middle) of Willowfield Athletic Club was awarded the top spot on the podium in the U11 Girls’ 1200m. Following her in second place was Jodi Foster (right) from East Down Athletics Club and Armagh athlete, Lyndsey Kelly (left) who came in third place. Pictured with firmus representative, Catherine Shine.

THE final stage of firmus energy’s Fab 5 series seen more than 100 young athletes from across Northern Ireland make their way to the Mary Peters track in the hopes of bringing home gold.

Organised by Lagan Valley Athletics Club, the series is opened to all young people aged eight and up.

The athletes who made their way to the Mary Peters track took part in a range of disciplines from shot putt, javelin, hammer and long jump.

Each event in the Fab 5 series was open to athletes of all abilities who would like the opportunity to either try out disciplines or compete in a more competitive manner.

In the U13 Boys 100m race, Finn Cross from Willowfield Athletics’ Club, managed first place with an impressive time of 14.73.

Other Willowfield winners included Emer McKee in the U11 Girls’ 1200m race and Hannah Culliland in the U17 Women 1500m.

The winning streak for Belfast athletes didn’t stop there.

Orangegrove Athletics Club in East Belfast had a number of their athletes storm the top spot on the podium. Jacob McKittrick, took home gold in the U13 Boys’ 1500m race with a time of 4.58.92.

Catherine Shine, who attended the event on behalf of firmus energy, said:

“The Fab 5 series is a great platform that enables young people an opportunity to show off their athletic abilities.

“It is a well-organised and fun event that allows people to enjoy themselves whilst also improving their skills.” 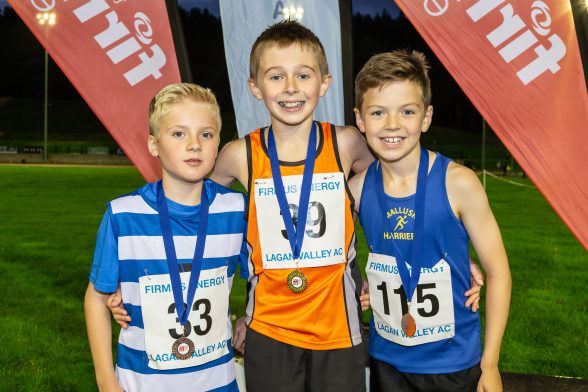 Jacob McKittrick (middle) of Orangegrove Athletics Club took first place in the U13 Boys’ 1500m. Following him in second place was Tom Fleming (right) and Colm McKee who came in third place (left).

“The fifth stage of the Fab 5 series brings to an end an amazing year for athletics in Northern Ireland.

“We’re very grateful for firmus energy as a sponsor and for the participants who joined us throughout the year.

“We hope to continue to facilitate the development of budding athletes across Northern Ireland next year.”

The firmus energy Fab 5 series is set to return again next April, giving aspiring and returning athletes perfect time to get some practice in!