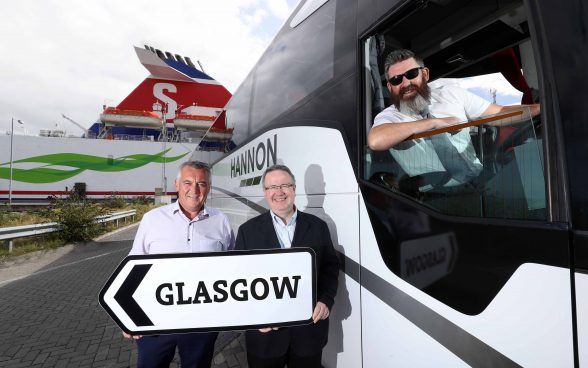 DRIVING GROWTH: Aodh Hannon (left) of Hannon Coach has revealed plans to expand the companys direct luxury coach service between Belfast and Glasgow to other towns across Northern Ireland. Also in the picture is driver Jim McAlorum.

THE success of a new direct luxury coach service between Belfast and Glasgow has encouraged operator Hannon Coach to expand the service to include other towns across Northern Ireland.

Hannon Coach’s Glasgow Express service is the only direct city to city through-coach service (i.e. using the same coach for the entire journey) from Northern Ireland, operating twice daily in both directions.

Company director Aodh Hannon claims that the service has attracted a lot of customers who might previously have flown and believes there is a lot of room for further growth.

“People have responded really well to the service and love the fact that it’s so hassle-free compared to flying and that there’s no extra charge for luggage,” said Mr Hannon.

“There’s a shared history and natural connection between Northern Ireland and Glasgow, which means people will always need travel options, and the success of our new express service from Belfast has shown that there is still a lot of potential to grow this market further.

“With this in mind, over the summer we piloted an extension of the service to include both Sprucefield and Lurgan and we are now looking at introducing additional services to and from Glasgow with one-stop connections from local towns across Northern Ireland.

“We have submitted applications for all of these new services to the Department for Infrastructure and hopefully we will receive the green light soon, so we can get the services up and running as soon as possible,” he added.

Ferry company Stena Line, carrier for all Glasgow Express services across the Irish Sea, has experienced increased coach traffic to Glasgow since the service began, according to Ian Baillie, Key Account and Product Sales Manager for the UK and Ireland.

“We’ve been carrying people between Northern Ireland and Glasgow for many years, working with a number of coach operators in this time,” said Mr Baillie.

“Glasgow has always been a hugely popular destination for NI folk and what the new Hannon Coach service has shown is that there is still room for growth in this market, with our own figures for express coach services to Scotland showing an increase of 7.5% year on year.

“The introduction of new pick-up points from more towns across Northern Ireland can only grow this traffic further, which is something we would obviously welcome,” added Mr Baillie.

Hannon Coach is part of the Hannon Group and operates a range of coach services across Ireland and the UK from its bases in County Armagh and Dublin.  For more information on the Glasgow Express, as well as other packages and services to a host of popular attractions, events and city break destinations, visit hannoncoach.com.