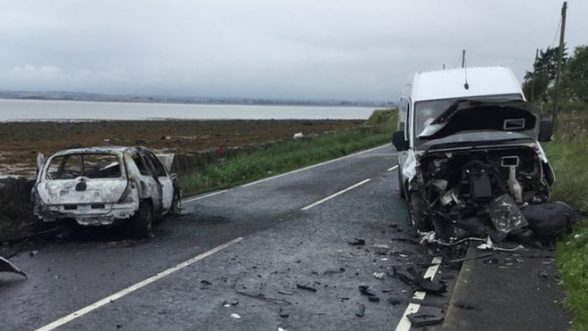 POLICE have praised the actions of a man who pulled an unconscious driver from a burning car this morning.

near Newtownards, County Down.

It followed a collision between a car and a van on the Portaferry Road at around 7.55 am this morning, Saturday, September 1.

One person is in a stable condition in the Ulster Hospital in Dundonald and another patient was taken to the Royal Victoria Hospital in west Belfast.

A police officer wrote on the PSNI Ards’ Facebook page: “I shook the hand of a very brave man today.

“I know we often say that people could have saved lives but the gentleman concerned today really stepped up to the mark.

“Seconds after this collision the car burst into flames with the unconscious driver still inside.

“Risking his own safety the gentleman managed to pull him free of the car and to safety,” the officer added.

A passing casualty doctor on his day off assisted two ambulance crews and a doctor who had been dispatched to the scene.