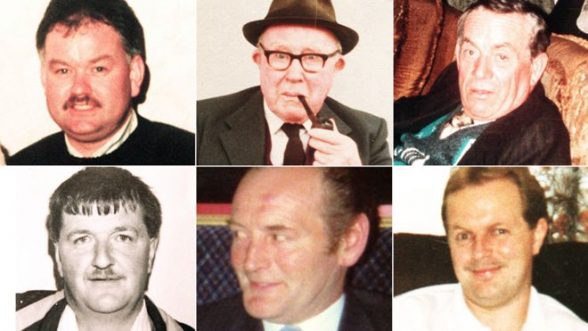 The six victims of the Loughinisland UVF pub massacre

TWO journalists have been arrested this morning as part of an investigation into the suspected theft of confidential documents.

Trevor Birney and Barry McCaffrey were detained this morning at their homes in Belfast.

They had produced the documentary “No Stone Unturned” for Fine Points Films about the murder of six men at Loughinisland in The Heights Bar by the UVF in 1994.

The offices of Fine Point Films in Upper Arthur Street was also searched today and documents and computer equipment were seized.

In a statement, police said: “Detectives from Durham Constabulary, supported by officers from the Police Service of Northern Ireland (PSNI), have today executed search warrants at three properties in the Belfast area.

“Two residential properties and a business premises were searched.

“Two men, aged 51 and 48, were arrested on suspicion of theft during this morning’s operation and are currently being questioned at Musgrave Police Station.

“A number of documents and computer equipment seized during the raids will be examined by specialist officers over the coming days.

“This morning’s pre-planned operation relates to the suspected theft of materials held by the office of the Police Ombudsman of Northern Ireland (PONI) relating to a police investigation into the murder of six men at Loughinisland, County Down in 1994.

“Officials from PONI reported the theft to PSNI, who in turn asked Durham Constabulary to conduct an independent investigation.

“The inquiry centres on the theft of sensitive material, which was used in a documentary film re-examining the 1994 murders.

A spokesman for Durham Constabulary said: “This morning’s arrests are a significant
development in what has been a complex investigation.

“The terms of reference given to our inquiry were clear in that the investigation is solely into the alleged theft of material from PONI.

“The theft of these documents potentially puts lives at risk and we will follow the evidence
wherever it leads us.”

A spokesperson for Fine Point Films said:  “We can confirm that officers from the PSNI and Durham Constabulary are currently speaking to our team and until that process is concluded we cannot make any further comment.”